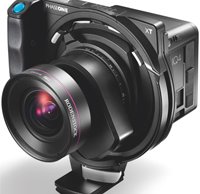 Having shot with the Phase One XF camera system alongside both IQ3 and IQ4 digital backs, a common issue I had with the system is its immense size and weight. Designed (and excellent) for studio applications, the XF camera is simply not a great fit for the landscape photography I enjoy doing. However, the incredible image quality, particularly with the most recent 150-megapixel IQ4 digital back, made the struggle worthwhile. However, if you want unrivalled image quality without the hassle of a large XF camera system, Phase One's brand-new XT camera may be for you.

Aimed primarily at landscape photographers who demand the utmost in image quality, precision and portability, the XT combines a full-frame medium format image sensor (in this case, IQ4 digital backs) with a portable, lightweight design. The Phase One XT camera is a digitally integrated field camera; the most compact digitally integrated field camera available. The camera is manual in operation, but you are aided by digital technologies, including the IQ4's excellent focus peaking and metering and touch-based user interface. A particularly interesting aspect of the XT is the attached IQ4 digital back's ability to communicate with the attached Rodenstock lens.

Speaking of the lenses, the Rodenstock lenses for use with the XT have been fitted with Phase One's digital integrated X-Shutter, an electromagnetic shutter which was originally designed for use in Phase One's various industrial camera systems and imaging solutions. The XT will launch alongside three Rodenstock lenses: The XT – Rodenstock HR Digaron-S 23mm f/5.6, XT – Rodenstock HR Digaron-W 32mm f/4 and XT – Rodenstock HR Digaron-W 70mm f/5.6. To take full advantage of this excellent optics, the XT camera system allows shift on both the X and Y axes. With precision-built adjustment knobs, you can shift a total of 24mm along each axis, which will allow for precision capture of images for stitching panoramas. The XT camera records the shift position in the digital file as well, for later reference. Phase One XT camera body (without digital back and lens). As you can see, it is quite compact by itself. Notice the dials for X and Y axis adjustments. Image credit: Phase One

The Phase One XT camera system will begin shipping today and is available through Phase One partners worldwide. The XT Camera with an IQ4 150MP digital back and a lens of your choice is available for $56,990 USD. Each of the three lenses will be available for between $8,990 and $11,990.

Hands-on with the Phase One XT

At this point, I would like to shift the focus toward my own experience with the Phase One XT camera system. I was able to go hands-on with the XT and new Rodenstock 32mm f/4 lens with a pair of Phase One employees: Drew Altdoerffer, Product Manager at Phase One, and Lau Nørgaard, Vice President of Research and Development. The XT I used had an IQ4 150MP digital back attached, which I have previously tested alongside the XF camera system.

My first impressions of the camera proved very positive. The camera body itself is built extremely well and feels very good in the hands. Further, it is considerably lighter and more compact than the XF camera system. The dual-action shutter release (a half-press enables live view on the IQ4 digital back, as there is no viewfinder on the XT camera body) has an excellent feel and responsiveness. The build quality of the XT camera is a considerable part of why the camera system is very expensive. Like all Phase One products, the XT has been designed and built to a standard, rather than a price point, meaning that the team decides that they want their product to feel and operate a certain way and it will cost what it costs. There are no compromises here. Phase One XT with Rodenstock lens and IQ4 digital back. Image credit: Phase One

This lack of compromise is also very evident when considering the IQ4 150MP digital back, which produces the best image quality of any image sensor I have used. Additional available IQ4 digital backs include 100MP Trichromatic and 150MP Achromatic, which is a dedicated monochromatic digital back. When designing the IQ4 digital backs, Phase One went back to the drawing board and rebuilt their operating system from scratch, which while an incredible undertaking, has given them extensive flexibility thanks to the new Infinity Platform. This platform is highly malleable, and frequently upgraded, adding new features and functionality to IQ4 digital backs already in the hands of customers. This idea of upgradeability is particularly important when you consider the initial cost of an IQ4 digital camera system. Sample image I captured with the Phase One XT, IQ4 150MP digital back and Rodenstock 32mm f/4 lens. Captured at ISO 50 and f/8 using the IQ4's new Frame Averaging shooting mode, which combines a user-selectable number of images to create a final composite output image in-camera.

In addition to offering improved functionality over time, the Infinity Platform also allows for Phase One to integrate all-new products, such as the XT, right into their family of products. In the case of the XT, it is immediately accessible in a way that the XF camera with IQ3 and IQ4 digital backs never quite was. The manual focus ring on the Rodenstock 32mm lens I used worked incredibly well, allowing very easy and precise adjustments, and the pared down user interface let me get straight to shooting while still having access to many advanced features in the menus, when I wanted them.

Getting back to the lenses, the Rodenstock lens I used proved excellent. It is not only very sharp, but the lens does an excellent job handling chromatic aberrations and fringing. This is due in large part to Rodenstock's optical expertise, but also partially due to the design of a camera such as the XT. Between the lens and the sensor, there is an enclosed space in which the entire lens moves as you change the focus, such that to focus you are actually moving the entire lens rather than any individual elements inside the lens. There's a certain rigidity involved here that results in very consistent quality. Phase One XT camera with IQ4 150MP digital back and Rodenstock 32mm f/4 lens. Processed in Capture One Pro.

Another aspect of the lenses is that they are all especially compact for a full-frame medium format camera system. Along with the thin XT camera body, the resulting system is impressively portable. The XT system would easily fit in a small backpack or shoulder bag and the difference between carrying and using the XT versus the XF is night and day.

Obviously, there are tradeoffs. You lose much of the speed and overall versatility of the XF system, you don't have autofocus and battery life is reduced due to a lack of a second battery slot and the camera's reliance upon live view.

For photographers looking for the ultimate in image quality but something that is back to basics in terms of design and operability, the Phase One XT is an appealing camera system. Of course, it's expensive, but that's the price you pay for being on the cutting edge of any industry and photography is no different. The cutting edge of photography sure does look and feel fantastic. Phase One XT camera with IQ4 150MP digital back and Rodenstock 32mm f/4 lens. Processed in Capture One Pro.

In order to tie up some loose ends with the Phase One XT announcement, let's take a closer look at some of the system's physical characteristics and specifications. The XT itself has been designed by Phase One and is manufactured by Cambo, a respected name in the industry and a strategic partner of Phase One. The physical mount on the XT is Cambo WDS compatible. Further, the XT has an Arca Swiss type rail tripod shoe on the bottom, which is detachable and also easily rotated between landscape and portrait orientation.

The three new lenses, seen below, have Phase One's electromagnetic X-Shutter, which is rated for 500,000-plus captures and is built using carbon fiber. The X-Shutter supports shutter speeds ranging from 60 minutes to 1/1,000s. The three Rodenstock lenses launching alongside the Phase One XT. Image credit: Phase One

The XT produces .IIQ raw files which are compatible with Capture One PRO 12.1.1 or newer. The camera records lens, exposure, aperture and shift data into the metadata of the image files, thanks to the digital interface between the IQ4 digital back and the Rodenstock lenses. Speaking of the IQ4 digital backs, all three over 15 stops of dynamic range and 53.4 x 40 millimeters in size. The IQ4 150MP that I used has a native ISO range of 50-25,600 and can shoot at up to 2 frames per second. The IQ4 150MP Achromatic has an ISO range of 200-102,400 and the IQ4 100MP Trichromatic has an ISO range of 35-12,800.

To learn more about the Phase One XT camera system, click here.