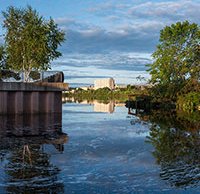 As Fujifilm continues to expand their GF lens lineup for the medium-format GFX system, the company has really run the gamut with respect to the size and weight of their lenses. Recently, GFX owners have been treated to a pair of excellent telephoto lenses, the GF 250mm f/4 and GF 100-200mm f/5.6, both of which are large and heavy optics. However, when the company launched the GFX 50R camera, a smaller, lighter and sleeker sibling to the original GFX 50S camera, there was a renewed demand for something medium-format camera systems have traditionally not offered: lightweight lenses. Enter the GF 50mm f/3.5 R LM WR.

During my hands-on time with the Fuji GF 50mm f/3.5 lens, I was particularly impressed by its sharpness and how enjoyable it was to use, even with a bulky GFX 50S kit. Despite costing just under $1,000 USD and being the smallest and lightest GFX lens to date, the GF 50mm lens feels robust and rugged. Further, there is no compromise when it comes to image quality, although there's a slight compromise when it comes to its maximum aperture. As a general walkaround lens, the GF 50mm is versatile. While it doesn't zoom nor focus very closely, the 40mm-equivalent focal length works well for many types of subjects, including landscape and nature photography. The f/3.5 aperture is certainly slower than I'd like, but when it comes to making a compact lens, it's a worthwhile tradeoff.