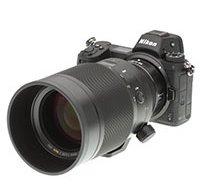 There are some lenses throughout Nikon's history which transcend being simply a lens and take on a distinguished status. For its rarity, incredible performance and catchy "Noct" moniker, the Nikon Noct Nikkor 58mm f/1.2 is one of these lenses. To this day, it is a much sought after fast prime lens, especially due to its discontinuation in 1997 after about two decades of production in two different models.

Its production was limited to begin with, given that the lens included precisely hand-ground glass elements and that it was aimed at the high end of the market. Aiming to recapture the spirit of the revered Noct 58mm f/1.2 lens, Nikon has announced the release of the Nikkor Z 58mm f/0.95 S Noct lens for the Nikon Z mirrorless camera system.

While we have long known this lens was coming, this is the first time Nikon has discussed in-depth specifications, pricing and release information for the 58mm f/0.95 S Noct lens. The manual focus lens takes full advantage of the new Nikon Z mount to deliver an even faster maximum aperture than the original Noct lens, which promises superior low-light performance and a super-duper shallow depth of field. Of the Nikkor Z 58mm f/0.95 S Noct, Nikon's Executive Vice President, Jay Vannatter, says the following:

"This is why the Z mount was created. The Noct is a testament to Nikon’s commitment to optical innovation driven by more than a century of expertise. We promised a new dimension of optical performance for the Nikon Z series and NIKKOR Z lens lineup, and by announcing our fastest NIKKOR lens ever made, the NIKKOR Z 58mm f/0.95 S Noct, we are making this claim a reality."

On the Nikon Z6, it is easy to see how large the Nikkor Z 58mm f/0.95 S Noct lens really is.
The pro-level lens features robust build quality and a lot of glass.

Further, the lens includes Nikon's Nano Crystal Coat, which combats diagonal incident light. The lens has been designed to combat sagittal coma flare, an aberration which would incorrectly render point light sources around the periphery of the frame. The history of the Noct lens combatting sagittal coma flare is an interesting one, as Nikon outlined in this piece as part of the company's Thousand and One Nights series. Prolific engineer Mr. Shimizu, Yoshiaki tackled this and many other optical issues for Nikon over the years, and the legacy of his work is still found in modern lenses today. While its inspiration may be found in a bygone era, the new manual focus Nikkor 58mm f/0.95 S lens includes numerous modern technologies and features. The lens incorporates an electronic information panel, which allows photographers and videographers to confirm aperture, focus distance and depth of field with a quick glance. Further, the lens' manual focus ring has been designed for ease of use and with a large rotation angle, allowing for precise adjustments, which are critical when working with a shallow depth of field. To ensure clear rendering, the included lens hood has been lined with felt, to reduce light reflections inside the hood. The manual focus lens can focus as closely as 1.64 feet (0.5 meters), resulting in a 0.194x maximum reproduction ratio. The lens has 11 aperture blades as part of its electromagnetic diaphragm mechanism, which promises stable aperture control during continuous shooting. The lens has an 82mm filter thread and weighs approximately 4 pounds, 6.6 ounces (2,000 grams). The lens has a maximum diameter of 4.01 inches (102 millimeters) and is 6.02 in. (153mm) long.

Built to exacting professional optical and build quality standards, the Nikkor Z 58mm f/0.95 S Noct lens will not come cheap when it arrives on October 31. The lens has a suggested retail price of $7,999.95 USD. The lens will ship with a premium custom padded case and felt-lined lens hood.