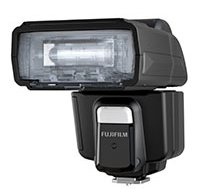 Fujifilm has announced the launch of the EF-60 Shoe Mount Flash and the EF-W1 Wireless Commander for the Fujifilm X Series and GFX System accessories lineup.

The EF-60 is Fujifilm's first shoe mount flash that is radio controlled, and allows both X Series and GFX System users with a powerful flash output in a compact and portable design. The EF-60 has a zoom range of 24-200mm and offers a maximum guide number of 60m (197 feet) at 200mm (in 35mm format). The TTL flash can be used on or off camera when combined with the optional EF-W1. The EF-60 can also be optically triggered by Fujifilm's EF-X500 Shoe Mount Flash.

The EF-60 delivers a full flash color temperature of approximately 5,300K via its Xenon flash tube. Flash recycle time is also reasonably quick at up to 3 seconds. The shoe mount flash also includes a white LED modelling light, which can help achieve focus in dimly lit areas in addition to helping you aim and position the flash. Fujifilm also states that the modelling light can be used as a continuous light for video makers. This image of the EF-60 mounted on the Fujifilm X-T4 helps put the new flash into scale.

When controlled wirelessly via the EF-W1, users can adjust the power output of the EF-60 in 1/3 power increments. The selectable power ranges from 1/1 to 1/256 and flash compensation is available from -1 to +2 EV. For creative lighting control, users can group units into one of three separate groups, assign a flash unit to one of eight channels and wirelessly control up to 30 total flashes. In addition to compatibility with the EF-W1, the EF-60 is also compatible with the Nissin Air10s Remote product, allowing integration with other Nissin Air System (NAS) compatible flashes. In addition to NAS compatibility, the EF-W1 uses 2.4 GHz wireless for its remote control.