Lensrentals Teardown: A Fujifilm GFX 100 battled some saltwater and lost 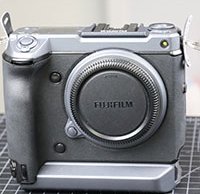 Roger Cicala and the team at Lensrentals would have preferred one of their Fujifilm GFX 100 cameras not had a fatal encounter with salt water. However, the incident afforded the team an opportunity to take apart Fujifilm's flagship medium format camera without fear of breaking it. Fujifilm itself already stated that repair was impossible. Further, Lensrentals could see what 'even a little saltwater does inside a camera.' It's pretty shocking how invasive water can be.

After removing the necessary screws to remove the GFX 100's tripod plate, it became immediately obvious that saltwater had gotten into the camera. Fresh water often leaves corrosion in its wake, saltwater leaves that damage plus salt deposits. Removing the tripod plate and/or grip and seeing evidence of corrosion is all a repair person needs to see to be '90% sure the camera is a write-off.' After removing the tripod plate, the corrosive damage of saltwater became immediately evident. Oftentimes, seeing something like this tells a repair person that the camera is doomed. Image credit: Lensrentals

The GFX 100 had been in dive housing and some saltwater had somehow entered the housing and then the GFX 100 itself. It worked for a few hours after the incident before dying completely. Per Lensrentals, even after replacing corroded parts in water-impacted cameras, it's not unusual for the camera to fail shortly after repair, which is why water damaged cameras are often considered irreparable.

The next step in taking apart the GFX 100 is removing all the grips. Doing so revealed a clear plastic window on the front grip, through which wireless signals can pass more easily. After removing the grips, they removed the screws, some of which were hidden quite well. With the screws removed, the large parts of the body can now be separated, exposing the large array of circuits, wires and the mainboard. None of these components appeared salvageable. Moving onto the LCD, it looked quite good after the GFX 100's fateful bath. Further, the team found that the hinges for the tilt function of the display looked very robust. The top assembly and its wiring also looked quite clean. The weather sealing on the top didn't quite pass muster for the group at Lensrentals, 'The seals between the various plastic shell pieces aren't what I call robust weather sealing.'

When investigating the IBIS mechanism, image sensor and lens mount, they found that Fujifilm uses shims to level the image sensor and keep it parallel to the lens mount. Are shims better than tension springs? It's hard to say, but shims are certainly easier when disassembling and reassembling cameras. Here you can see some of the damage caused by even just a little bit of saltwater getting into the camera. Image credit: Lensrentals

The IBIS unit is an impressive feat of engineering, to be sure, but so is the focal plane shutter in the GFX 100. To reduce shutter shock, Fujifilm mounted the entire shutter assembly on springs such that it is not mechanically connected to the camera body itself. Very cool! The image sensor comprises a stack of glass pieces plus the image sensor itself. In total, the sensor stack had three pieces of glass which measured a total of 3.24mm in thickness, not counting any air gaps. Of the sensor, Cicala says, 'I like the robust construction; I like that the sensor is attached on a complete plate, not just by some tabs, etc. etc. But this is a big sensor in a big body. Fuji had plenty of room to do it right. To their credit, they did.' Here you can see a part of the IBIS assembly in the GFX 100. It is a very robust design that utilizes strong magnets. Image credit: Lensrentals

There are many more images and insightful details in Lensrentals's full teardown of the GFX 100, so be sure to head there and check it out. Near the end, there's a nice discussion about how IBIS works in general and how the mechanism operates within the GFX 100. Of the IBIS, Cicala writes, 'The IBIS unit looks like it could stabilize a small child.' As robust as many of the internal components of the GFX 100, excellent weather sealing was nowhere to be found, which should at least give GFX 100 users some pause before heading into the wilds with their $10,000 camera. As it turns out, a little water can have a big impact. When I went hands-on with the GFX 100, I certainly had no qualms about weather…perhaps I should have.