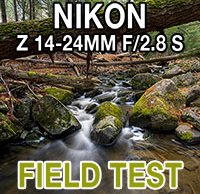 Nikon released the 14-24mm f/2.8G lens for F mount way back in 2007 alongside the 24-70mm f/2.8G ED lens. With impressive performance, both zoom lenses have earned places in many photographers' kits. The 14-24mm f/2.8G has a few drawbacks, however, among them its inability to natively accept filters and its heavy construction. With the advent of the mirrorless Nikon Z system and the advantages the new Z mount has to offer, Nikon has revisited its classic 14-24mm f/2.8 lens with the new Nikon Z 14-24mm f/2.8 S Nikkor.

The new wide-angle Z lens is much lighter than the F mount version and accepts 112mm screw-in filters using the larger of two included removable lens hoods. These reasons alone are enough to motivate Nikon Z users to opt for the native Z version of the lens rather than adapt the F mount 14-24mm f/2.8 zoom. However, there's a lot more to like about the Z 14-24mm f/2.8 S Nikkor lens than its new form factor. The same excellent engineering applies to the interior. The lens has 16 elements in 11 groups, including 4 ED elements and a trio of aspherical lens elements. The 14-24mm f/2.8 S also includes Nikon's ARNEO and Nano Crystal coatings. The result is great sharpness and well-controlled aberrations. I was able to test the Nikon 14-24mm f/2.8 S paired up with both the Nikon Z7 and the new Z6 II camera bodies. In addition to evaluating the lens itself, Nikon sent along a 112mm circular polarizing filter. To see how the lens fared during testing and to learn how it differs from and improves upon its predecessor, read my Nikon Z 14-24mm f/2.8 S Field Test. As always, you can also download an assortment of RAW and JPEG files from our Gallery Page.