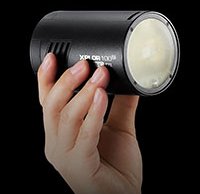 Adorama and Flashpoint has announced the XPLOR 100 Pro TTL R2 Battery-Powered Monolight. The XPLOR 100 Pro is a 100 watt-second, rechargeable lithium-powered flash and is Flashpoint's lightest and smallest flash unit.

The XPLOR 100 Pro is a wireless flash and utilizes R2 wireless communication. The 2.4GHz radio system allows the flash to be used as part of a multi-flash lighting setup, including access to 32 channels and five wireless groups. The R2 signal reception range is 328' (100m).

Using the R2 transmitters, the XPLOR 100 Pro is compatible in both wireless TTL and manual modes with Canon, Fujifilm, Nikon, Olympus, Panasonic, Pentax and Sony cameras. In terms of light modifier compatibility, the XPLOR 100 Pro's front flash face is magnetized, allowing it to accept light modifiers such as grids, snoots and diffusers. You can use the same modifiers and accessories which fit on the Flashpoint round head flashes. In terms of total dimensions, the XPLOR 100 Pro is 4.4" x 3.0" x 3.0". The flash weighs 18.5 ounces with its battery installed. The battery is a 2,600mAh rechargeable lithium battery and is the same battery used in the Flashpoint Zoom Li-on X and Zoom Li-on III Speedlights. The battery provides up to 360 full-power flashes. The flash power can be adjusted manually over a nine-stop range from 1/256 to 1/1 output. Recycle time ranges from 0.01s to 1.5s. The flash can high speed sync (HSS) to 1/8,000s and also offers first and second curtain sync modes. The flash has a color temperature of 5,600°K (+/- 200°K), although for more color critical applications, an optional stable color mode is available which reduces the variability to +/- 75°K. To ensure stability, there is an automatic fan and advanced IGBT circuitry. The XPLOR 100 Pro also includes a modeling light with user-controlled intensity across 10 settings.

The Flashpoint XPLOR 100 Pro is available for preorder now from Adorama for $299.99 USD. The flash comes with a charger, battery, USB cable, bag and bracket and comes with a 1-year warranty. There also kits available with included light modifiers and accessories.