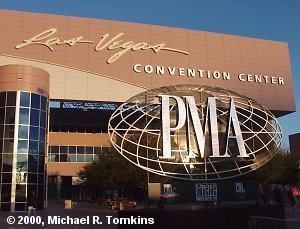 Welcome to the Imaging Resource's coverage of the annual Photo Marking Association (PMA) Show in Las Vegas, Nevada! The PMA Show has long been the place to be for the Imaging industry, so perhaps it is no surprise that PMA has also become the traditional showplace for all the very latest in digital imaging. With all the heavyweights and plenty of hopefuls lining up to show their newest products, many of them only announced in the days running up to the show (or even at the show itself), PMA is always an exciting place to be! This year looks to be an extraordinary event, with more new digital products than ever before, and many that we think will rock the industry. We'll be covering the show live, with reports several times a day from the show floor on all the new digital imaging products, be they targeted at the Pros, or the home user. You, too, can be part of the action, by participating in our news forums, where you can discuss the latest products and the implications of what you've seen!

So what should you look out for? A prequel to PMA itself, the Digital Focus event on the evening of February 02, promises to bring all of the digital camera manufacturers and their latest models into one room, and is an excellent chance for us to see the products up close... This is followed by the show itself, which runs from Thursday February 03 to Sunday February 06 - and we'll be there for the peak of this! Who will be at the show? Expect to see all the names from Agfa to Zing - and a whole lot else in between... This is going to be a really exciting week!