LAS VEGAS, Nev. -- For three hours this afternoon, over 400 members of the press wandered from table to table viewing over 100 companies' offerings at PMA Sneak Peek.

SLIDE SHOW & GALLERY | Back to Contents

You can view our Flash slide show of 37 images from the event or, if you prefer, our HTML gallery of the same images. Both productions were created with Adobe Lightroom 1.0, which included image selection and editing, too. 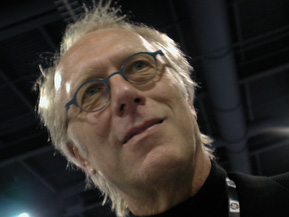 WANDERING IN THE DESERT | Back to Contents

Our tour of the tables got off to a rocky start when O'Reilly (http://www.oreilly.com) author Mikkel Aaland ran into us. Literally. When we got up off the rug, we observed he again was dragging his luggage with him. "When are you going to start staying in hotels?" we asked. But it was an unfair question. He couldn't respond with his mouth full.

The carving table, the appetizers, the full bar were grand distractions, but Mikkel introduced us to a digital imaging envangelist from the very beginnings of this revolution whose name we feel protect given his heretical opinions. His great concern these days, he confided, is preserving all these images we're taking. They're essentially emphemeral. Long ago, he advised Kodak to include a film recorder in their kiosks so consumers making prints at a convenience store could walk out with an archival filmstrip of their images.

"Modern color film is can last up to 700 years," he explained. "And it's human readable."

These evangelists can really confuse you, we thought to ourselves as we started our tour of the tables. 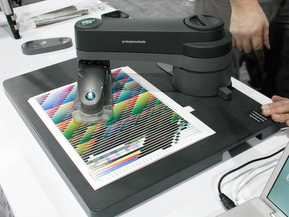 X-RITE | Back to Contents

At the X-Rite table (http://www.xrite.com) we saw the new and under $2,000 i1-iO scanning table. With an X-Rite i1PRO spectrophotometer attached, it automatically reads test charts as thick as 10mm (from "thin polybag material to ceramics and textiles," we were told). And it does it faster -- and more accurately -- than a human can, too.

We asked how difficult it was to align a test sheet so the automatic arm could accurately find the samples. No problem. You manually show the arm the corners and it takes it from there. Impressive.

NORCENT DIGICAMS | Back to Contents

Call it exceptional consumer value, if you like, but the game packing features into a compact, stylish yet inexpensive box is one of the new sports in this business. Take Norcent (http://www.norcent.net), for example. 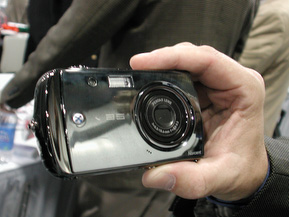 The Xias DCS-760 is a 7-megapixel digcam with a smoked charcoal metallic finish, 3x optical zoom with 4x digital zoom, taking SD cards and a scratch-resistant 2.5-inch LCD. You'll be able to find it for $199 in April.

The company has two other compact lines including the $129-179 25 Series and the 10-Mp 50 Series with a 3-inch LCd, face detection and anti-shake software for a good bit more.

DIVX | Back to Contents

Pentax and Casio, at least, are competing with new features like DivX certification (http://www.divx.com). Jennifer Culter took a short video of our hand talking on a 10-Mp Pentax Optio A30, popped the SD card into a DivX-certified DVD player and with no copying, conversion or magic, played the video.

DivX is ambitious. It wants to be a "common media language" so DivX files can play on any certified device, sort of the PostScript of video. The company has a content-oriented Web site called stage6 (http://www.stage6.com) that allows content creators to share their videos without the quality degradation of sites like YouTube. 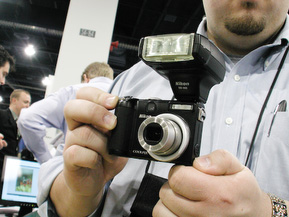 NIKON | Back to Contents

At the Nikon table (http://www.nikon.com) we were warmly received with the venerable Coolpix 990. We had to hand it off to try out the new D40x, the just-announced 10.2-Mp sibling of the popular D40.

We also got a peek at the Nikon Coolpix 5000, the one with a hot shoe. This one had a Nikon SB-400 flash attached. Very cool. Too bad the LCD doesn't swivel. We might have left the 990 at the table.

BAGS | Back to Contents

What's a camera without a camera bag? Naked. Several bag companies were showing their wares, but one in particular got our attention. We'd recently gone through the stores trying to find a good holster bag for a dSLR and eventually did pick up a Lowe we like. But we were making a few compromises. 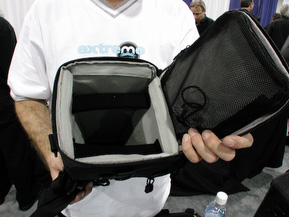 The Teton holster we saw at the M-Rock (http://www.m-rock.com) table, however, did not compromise. The first thing that attracted us to it was the large mouth, which accommodates a vertical grip. It also came with a weather jacket and bungie straps on the bottom to grab a jacket or a light tripod. And two straps so you can wear it over your shoulder or attached to a backpack or on your chest. It even includes a lens cloth. Total damages are just $60.

We also liked their $100 Everglade dSLR bag with configurable compartments and a U-shaped lens cradle. Plus all the extras of the Teton. The lightweight bags are all made with plastic and foam panels. 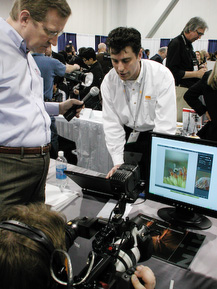 Dfine With U Point

U POINT | Back to Contents

Nik Software (http://www.niksoftware.com) was showing the first application of its U Point technology outside Nikon's Capture NX. It has revamped Dfine, its noise reduction software, using the revolutionary masking interface.

Look for the video of this spectacular application. It made us hope we'll be seeing U Point show up in more places soon.

Now that Canon has joined Olympus with a live LCD dSLR, you might feel a bit antiquated peering through your camera's eyepiece. But you can swap it out for a Zigview S2 (http://www.secu-line.com/) and have not only a live view but one an articulated LCD that won't interfere with autofocus. 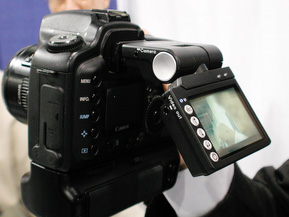 Secu-line's Soon-Gi Jang demonstrated the Zigview on a Canon. The lith-ion battery has a run time of about two hours, he said. The LCD can be detached from the mount and actually fire the camera via a cable connection. You can also plug in a video cable to focus on a TV screen.

WIRELESS USB | Back to Contents 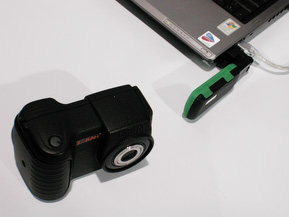 Artimi (http://www.artimi.com) develops wireless semiconductors for USB electronics. At their table, they had a digicam retrofitted with Wireless USB and a USB dongle plugged into a laptop. They took some shots and wirelessly transmitted them to the laptop and then printed them on a printer with Wireless USB. No wires.

They had to be within a few inches, but the spec supports transfer to three meters. And it's as fast as USB 2.0 Hi-Speed at 480 megabits a second.

IMAGE TRENDS | Back to Contents

The guys from Image Trends (http://www.imagetrendsinc.com) announced two new applications priced at $49.95 each and showed both at their table.

DustKleen is an automatic dust removal program with manual touch up controls for scanned images from both film and prints. SensorKleen a semi-automatic SmartBrush that removes artifacts created by dust and debris on the dSLR sensor cover. These products are, at the moment, Windows-based stand alone applications but Mac versions will follow, Mike Conley told us.

What appealed to us about them was that no matter how much you went over an area, you couldn't overdo it. It was like error-free spotting. 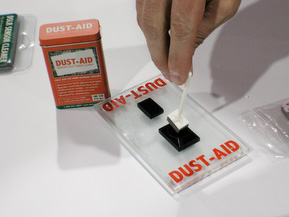 SENSOR CLEANING | Back to Contents

We saw a couple products that claim to safely clean dSLR sensor covers. And they couldn't have been more different.

Dust-Aid (http://www.dust-aid.com) is the simple one. The dirty work is done by a foam pad with an adhesive on the working end that leaves no residue, like a Post-it note. In fact, it isn't very tacky. We touched it and it hardly grabbed. But it's enough to lift dust off your sensor cover.

You attach it to a small plastic wand with a comfortably large flag-like grip. It's offset from the wand's pole so you can see what the pad is doing. For $39.95 you get a set of pads and the wand in a small tin. Enter the code "PMA07' in the order form on the Web site for a $5 discount during the show. You'll also be able to buy just replacement pads soon, we were told. 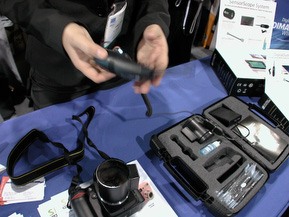 On the other end of the spectrum is Delkin's $189 SensorScope System (http://www.delkin.com). The system includes a SensorScope that mounts on your dSLR's lens opening and illuminates with magnification the sensor cover, a SensorVac that runs from a battery pack or USB, SensorWands, SensorSolution for the wands, a carrying case DeWalt would be envious of and a user manual.

JOBO | Back to Contents 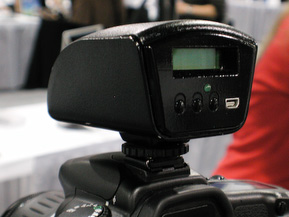 The photoGPS intrigued us. No cable? The device is triggered by the flash signal in the hot shoe and stores the data for each shot in its internal memory. With the included software, the GPS data is downloaded via USB and merged with the image data.

Our video crew did a piece on this worth watching for.

LENSBABIES | Back to Contents

They were also over at the Lensbaby table where the company was showing off its new medium format Lensbaby (http://www.lensbabies.com). 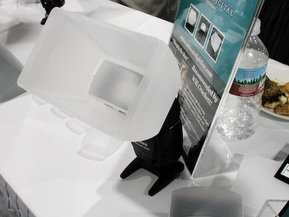 FLASH DIFFUSION SYSTEM | Back to Contents

Meanwhile, we were intrigued by a flash diffusion system from Ultimate Light Box (http://www.ultimatelightbox.com). It starts with a custom plastic mount available for about twenty different external flash units. To that you can add a simple $19.95 domed diffuser (mount included), a $24.95 light box (which functions like a soft box), a $6.95 mini reflector (the light box without a diffuser in front), a $19.95 black box (a black rather than diffused light box), sensor shields (to block light on one or another side of a light box) and colored gels.

We particularly liked the diffuser material itself. It diffused light but it wasn't milky. It looked more like pebbled glass, transmitting more light than we might expect.

HAVE A LITTLE FUN | Back to Contents

The aVinci Experience (http://www.sequoiamg.com/) transforms your photos and videos into a multi-media production (from DVDs to books) "using the latest Hollywood effecs and themed storyboards." It's coming to a kiosk near you soon, too.

BUT GET SERIOUS | Back to Contents

We did enjoy a peek at two fine art paper lines, one from Innova (http://www.innovaart.com) which replicates the fiber sheets of the past and another from Hahnemuhle (http://www.hahnemuhle.com). Both firms provide ICC profiles for their papers for a variety of printers. Innova's are actually done by a professor at the Rochester Institute of Technology while Hahnemuhle's are done inhouse.

TRIPOD HEADS | Back to Contents

We caught one of our video crews admiring the tripod heads form Acratech (http://www.acratechusa.com), particularly the Ultimate Ballhead, which weighs less than a pound and the Long Lens Head, which can support a 600mm f4.0 lens with perfect balance.

PEEK A BOO | Back to Contents

For a Sneak Peek, PMA's three hour table hopping treat was a show in itself. Be sure to see the companion Flash slide show or HTML gallery.