Longtime readers of Imaging Resource will be well-familiar with DxO Optics Pro, a software program that I awarded my "Best in Show" distinction to back at the February 2004 PMA show. DxO Lab's "digital optics" technology can deliver amazing improvements in image quality, regardless of the quality level of the lens you're shooting with: Cheap lenses shoot like expensive pro glass, and high-end lenses achieve a startling level of clarity and low distortion.

In the slightly over two years since it's initial release, DxO has maintained an aggressive development schedule for Optics Pro, with four major releases of the program. (Counting version 3.5 as a major release.) The software now works with a wide range of SLR bodies and an even wider range of lenses, as well as with many RAW file formats.

Now, DxO's optical wizards have come up with a whole new range of features, bundled into version 4.0, including some of the slickest wide-angle distortion correction I've seen yet: To me, the new program finally realizes the true potential of ultra-wide angle lenses, rendering objects more or less as humans see them, with vastly reduced distortion. (Note that we're not just talking about barrel/pincushion distortion here; that's old hat: What's being corrected this time is the stretching of objects that remains in ultra-wide angle shots after you adjust for barrel distortion. DxO calls this "Volume Anamorphosis". Stay tuned, we'll have some samples below.)

The best part is that DxO is offering a public beta of the new software, so you can play with it and see how it works without spending a dime.

A full treatment of all these capabilities is beyond the scope of this article (we'll do a full review, hopefully soon), but that said, let's at least hit a few of the high points...

The current version 3.5 of DxO Optics Pro includes both lighting and noise "engines," for dynamic range enhancement and optimized noise reduction of images from supported cameras. New to version 4.0 is a Color Engine, which offers a number of new capabilities.

Many programs for processing images from digital cameras offer white balance adjustment tools. These let you adjust for overall color casts relatively easily, balancing overall color to compensate for the color of the dominant light source. Such controls generally work well for situations where the scene is lit from a single source, but are inadequate when the scene has multiple light sources present, or color casts caused by reflection from a nearby colored object. There are also situations where you'll want to tweak an individual color by itself, without affecting the image as a whole. Most white balance tools also require the presence of a neutral-hued object somewhere in the scene to use as a neutral reference.

Selective color correction is by no means a new feature: Photoshop's Replace Colors and Selective Color tools have been around for a long time, not to mention the by-now-standard process of using adjustment layers to make local color corrections. More recently, Nikon's soon to be released Capture NX software takes advantage of unique technology from Nik Software, to help even unsophisticated users make selective color adjustments. 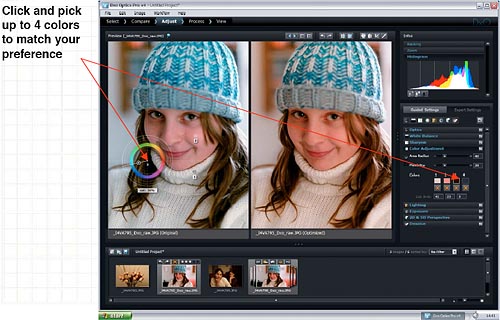 In version 4, DxO Optics Pro, you can choose up to 4 separate points on the image and adjust each selected color independently for hue, saturation and brightness. As of this writing, we haven't had a chance to fiddle with the controls ourselves yet (we'll be downloading the public beta as soon as it's available), but a demo we saw recently was impressive for the ease with which colors could be selected and tweaked. 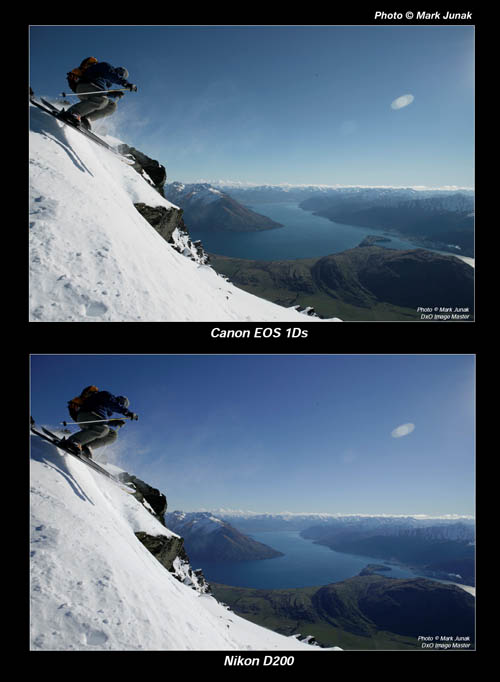 Version 4.0 also incorporates the results of DxO's careful color profiling of the various camera bodies they support. It's no secret that every dSLR model out there looks at color a little differently, it's almost like dealing with different film types back in the pre-digital days. The profiles developed for various dSLR bodies let DxO Optics Pro do a couple of potentially useful tricks. For one, it can remap any given camera's color space to deliver colorimetrically accurate rendering, either using a standard gamma=2.2 tone curve (which DxO calls a "Fidelity" profile), or using the manufacturer's tone curves (what they c call the "Camera Neutral" profile).

This strikes me as being very useful, as I've often had to fight with my cameras to give me accurate renditions of certain hues. ("Red push" is a very common malady of digital cameras of all stripes.) If the DxO profiles work as advertised (as this is written, I haven't had the opportunity to test them on any sample images yet), the ability to null-out various camera color biases promises to take a lot of pain out of post-processing, letting you at least begin working from a neutral, accurate starting point.

More unusual, and a little harder to see the use for, is the ability the DxO profiles and version 4 give you to actually map one camera's color rendering into another camera's color space. Conceivably, you could make images from a Canon 1Ds Mark II look like those from a Nikon D100. That may not be a conversion someone would choose, but I can perhaps see photographers wanting to map between bodies from the same manufacturer: A Canon 1D Mark II mapped to match a 1Ds, for instance. This could certainly make life easier for photographers using multiple bodies on the same shoot.

Here's a list of cameras for which "Color Looks" are provided in version 4:

Finally, beyond the profile-based color manipulation options, Optics Pro version 4 offers a number of standard Color Modes, providing various combinations of contrast and saturation adjustments, including some color-specific changes in the case of Portrait Mode. Here's a list of the Color Modes available:

Along with the various feature enhancements, version 4 of Optics Pro brings some significant speed and workflow improvements as well. Specific performance boosts will be somewhat platform-dependent, but MacBook users will be particularly pleased to hear that version four is fully Mac-Intel optimized, providing a massive 500% boost in batch-processing speed.

Other speed enhancements include greatly accelerated image import speeds, preview feedback that's up to 3x faster when making image adjustments, with smoother and more rapid slider control, and multi-threading that lets you continue adjusting images while other images are being processed. (I saw this in a demo, and it was quite impressive - you could basically just hop back and forth between images, tweaking any or all of them, and the rendering process would continue uninterrupted in the background. The program didn't seem to care if you happened to re-tweak an image it was currently processing, it'd just pick back up and redo it with the new settings as soon as you were done. Very handy; nice not having to wait for the computer.) Multiple simultaneous image previews are also now supported. 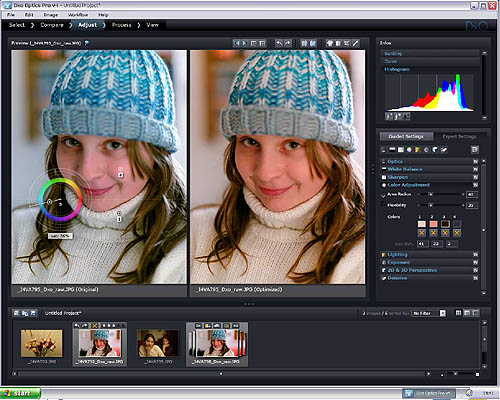 From a workflow and user interface (UI for short) standpoint, the entire workflow of version 4 has been analyzed and reworked by both photographers and UI experts. The screen shot above shows an overall view of the new UI, the crops below call attention to several key features. 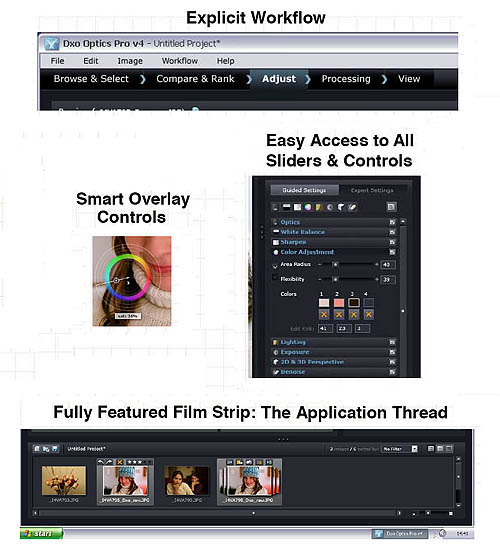 Optics Pro is moving to become more of an all-in-one workflow application for digital photography, but for a lot of shooters, Adobe Photoshop is central to their process. With Optics Pro version 4, the DxO Optics, Lighting, Highlight Recovery and Noise Engines are packaged as a single Photoshop plug-in, so all those capabilities are now available directly within Photoshop. The plug-in also lets you open both JPEG and RAW files and launch automatic corrections, without having to script or create an action inside Photoshop.

Saving my personal favorite to last, several major enhancements to DxO Optics Pro come in the distortion-correction arena. Some features are basic but welcome, including a simple tool for getting your horizons level and another for making perspective corrections. 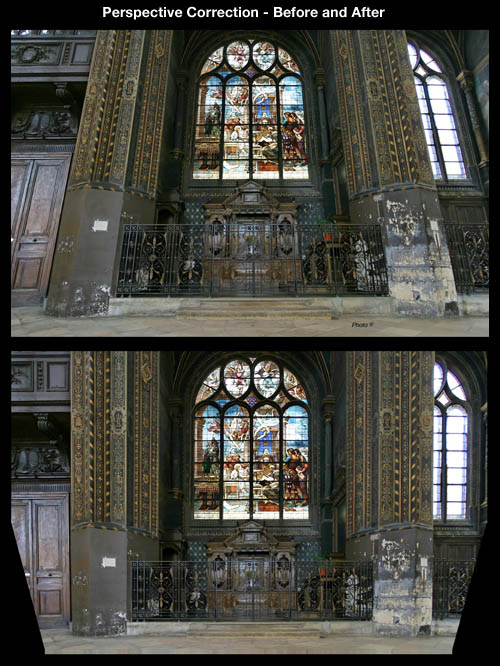 Now we come to my personal favorite feature, something DxO calls "Volume Anamorphosis."

Anyone who's played with extreme wide angle lenses will be familiar with the way objects near the edges of the frame get stretched, even after you've applied corrections for barrel distortion. The shot below illustrates this: 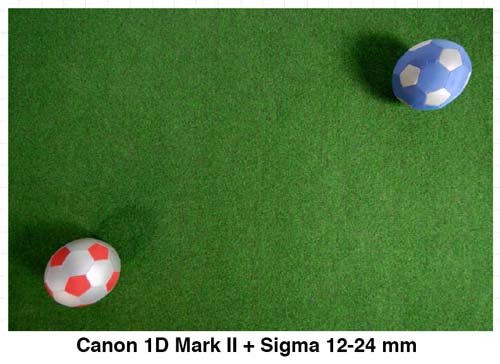 The distortion here is pretty obvious, thanks to the perfectly spherical shape of the soccer balls. Now, check out what the picture looks like after DxO Optics Pro gets done with it: 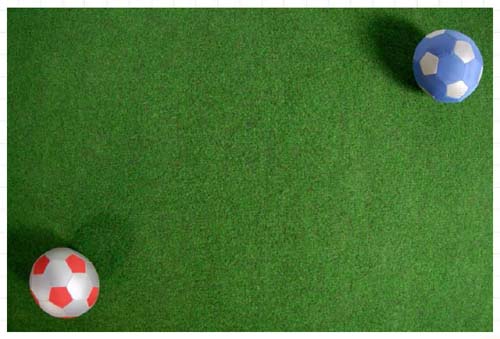 What really grabs me about this is that this is how I would have remembered the scene looking(!) Maybe I'm a little off in the head (no chorus of agreement, please), but this is just really exciting to me. How often have I tried a wide-angle group shot, and the people in the corners of the frame have squashed-looking heads, or people standing at the edges look 90 pounds overweight?

It turns out that you want to do slightly different corrections, depending on whether you're dealing with spheres (people's heads) or columns (architectural details or people shot full-length). To accommodate these different situations, Optics Pro offers two types of anamorphic correction Spherical or Cylindrical. Here are two sample shots from DxO that illustrate the need for and effects of these two types of correction. (Both original shots were captured with a rectilinear wide-angle lens.) 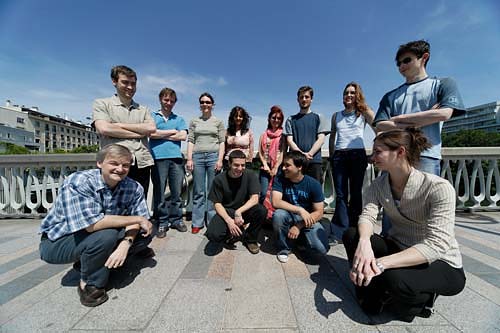 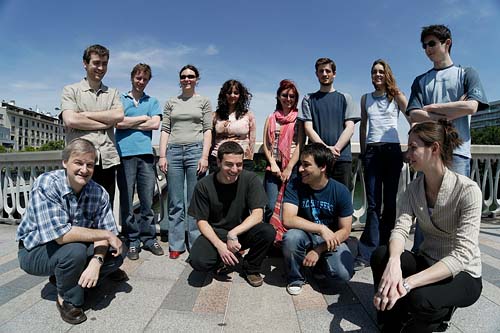 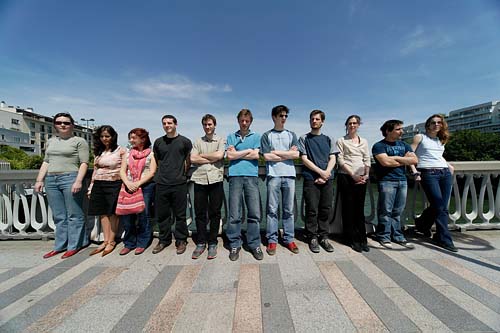 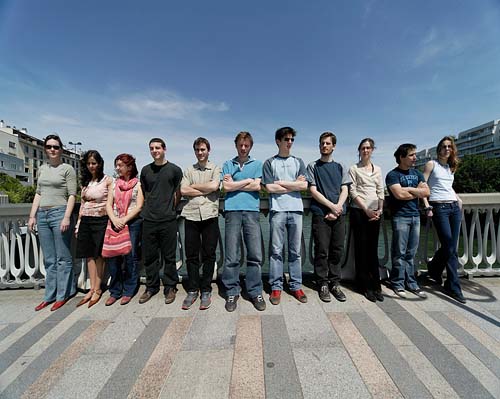 If you look at the images closely, you'll see that (as usual) there's no free lunch here: Optics Pro is forced to introduce new (but less objectionable) distortions in the process of correcting the volume distortions. In the case of the spherical correction, you can see that the railing behind the group is more curved in the "after" picture than in the original. In the case of the cylindrical example, it looks as though the left and right edges of the image have been stretched vertically, making the people on the edges of the group look taller than they actually are. You'll have to decide for yourself how you feel about the trade-off that's being made: Most of the time, I'd gladly accept some curvature of horizontals in exchange for normal-looking heads, and I suspect almost anyone would prefer to be shown as taller but the right width, rather than wider but the right height. ;-)

There's clearly a lot here to digest, and even an article as long as this one has only scratched the surface. As I said at the outset, I'm hoping we'll be able to do a full review of the new Optics Pro soon. (Probably after the final version ships, though.) In the meantime, DxO says they'll have a public beta of the Windows version of Optics Pro version 4 available soon. Check their website for details (You can leave your name and email via a form there, to be notified when the beta is available.)