The new lens abandons the variable aperture for a constant design, with ƒ/4 as the largest aperture size. The lens continues to be designed to fit the FX (35mm) sensor, and when mounted on a APS-C body, the lens will provide an effective field of view of 36-180mm.

The lens ships with a petal-shaped lens hood, takes 77mm filters, and is available now for approximately $1,300.

Sharpness
We'll start with the performance of the 24-120mm ƒ/4G VR when mounted on the sub-frame D300s. In general, performance is best in the wide-angle and mid-range, and surprisingly, it performs at its best when used wide open or stopped down just slightly.

When set to its widest aperture setting (ƒ/4) and 24mm, the lens is almost tack-sharp already - we note just 1 blur unit in the center, and just under 1.5 blur units in the corners. Stopping down does not really improve performance at 24mm; in fact, if you're shooting at this setting the best performance comes at ƒ/4 and slowly degrades as the lens is stopped down. The most obvious point is at ƒ/11 where diffraction limiting has begun to settle in, and we note results of around 2 blur units across the frame. It's three units at ƒ/16, and four units at ƒ/22, where it's fairly uneven across the frame. The mid-range performance (28-50mm) is similar but slightly better; the optimal setting for sharpness comes at 50mm and ƒ/5.6, where the lens is essentially tack-sharp across the frame.

At 70mm and above we begin to note some issues with sharpness. In particular, corner softness is fairly high when used at ƒ/4 from 70-120mm; a small patch of central sharpness, surrounded by 3-4 blur units of corner softness. It's worst at 85mm, where the corner softness is in the range of 5-6 blur units. However, stopping down to by just one stop to ƒ/5.6 almost completely cures this problem, and we note the same excellent performance of the wide- and mid-range angles. Fully zoomed-in performance (120mm) is actually a bit better than that found at 70 and 85mm.

With the lens mounted on the full-frame D3x, corner issues are much more problematic; what was excellent on subframe becomes merely good on full, and what was mediocre becomes quite poor indeed.

Specifically, wide-angle and mid-range performance is still fairly good, but in this case optimal performance is no longer found at the lens' widest aperture settings, as corner softness is now a factor. Stopping down reins in the corner softness, and so the recommendation here for optimal sharpness is to stick to ƒ/5.6, where we see between 1-2 blur units across the frame. 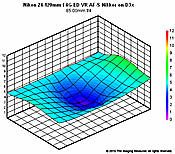 Performance on the long end is problematic when used wide-open (ƒ/4) at either 70mm or 85mm. In particular, we see only a small area of central sharpness, surrounded by intense corner softness, upwards of 6-8 blur units. It's hard to say that there is a problem with our sample of the lens, given the excellent performance at other focal lengths. All is not lost however - again, simply stopping down to ƒ/5.6 makes a dramatic difference, presenting an image with ~1.5 blur units in the center, and 2-3 blur units in the corners.

In summary, performance is generally excellent, with a few puzzling sore spots, especially when the lens is used on a full-frame camera body.

Chromatic Aberration
Nikon has seen fit to include several technical features in order to reduce the appearance of chromatic aberration. Particularly, two ED glass and three aspherical lens elements, and a Nano-Crystal coating. However, even with the automatic chromatic aberration reduction in both the D300s and D3x, CA is higher than expected when the lens is used at its wider apertures. Specifically, magenta/blue fringing can be noted at edges of high contrast, in the corner areas of the image. The impact of CA is reduced when the lens is stopped down, and used in the middle of its zoom range (28-50mm).

Shading (''Vignetting'')
When the lens is mounted on a sub-frame camera such as the D300s, there is no corner shading to speak of. It's more prominent when the lens is mounted on a full-frame camera: when set to 24mm and ƒ/4, images will have corners that are up to 1 1/4 stops darker than the center. Other focal length / aperture settings are more forgiving; at ƒ/4, corner shading ranges between 1/2 and 2/3 of a stop at 28-120mm. Stopping down reduces this corner shading, and at ƒ/8 and smaller, it's negligible at 35mm and longer. At 24-28mm however, there will always be some element of light falloff.

Distortion
Zooms lenses invariably have complicated patterns of distortion, and in this regard the Nikon 24-120mm ƒ/4G is not unusual. Between 24-30mm distortion is of the barrel variety, with upwards of +0.7% (DX) and +1.3% (FX) in the corners. There isn't really a point where there is ''no'' distortion, but the effect is minimized around 30mm. After that, the corners show the pincushion style of distortion, with the largest values showing between 50-85mm: -0.4% (DX) and -1% (FX).

Autofocus Operation
An AF-S lens with ultrasonic motor, AF operation for the 24-120mm ƒ/4 is virtually silent and reasonably fast, if not lightning quick: the AF motor took right around a second to slew from closest focus to infinity. The AF-S specification also means you can override the AF motor at any time by just turning the focus ring, without having to switch the camera or lens to manual focus mode. The front element does not rotate during focus operations, making life that little bit easier for polarizer users.

Macro
The lens isn't a dedicated macro lens, but despite this it actually produces fairly good macro results: 0.24x magnification, with a minimum close focusing distance of 45cm (around one and a half feet).

Build Quality and Handling
The 24-120mm ƒ/4G is composed mostly of polycarbonate plastic, finished in Nikon’s mottled black matte finish. Thanks to the plastic construction it's a little lighter than you'd expect for a lens of its size (670 grams, or one and a half pounds). Then lens has a distance scale under a plastic window, marked in feet and meters, but there are no depth of field markings and neither is there an infrared index mark. Apart from the zoom and focus rings, there are three control switches: one to enable or disable autofocus on the lens (marked M and M/A), one to enable or disable image stabilization (marked VR ON and OFF), and the last to switch between active and normal VR modes.

The new lens features some useful upgrades: in addition to Nikon's nano-crystal coating, two new elements have been added to its optical configuration, for a total of 17 elements in 13 groups, including 3 aspherical and 2 ED elements. The lens diaphragm is upgraded from seven to nine, and those blades are now rounded to produce more pleasing out-of-focus areas. Finally, Nikon has adjusted the lens to use 77mm filters instead of 72mm.

The 24-120mm ƒ/4G VR is one of Nikon's lenses where the focus ring is placed before the zoom ring; the majority of Nikon's lenses feature a zoom ring first, then a focus ring near the front element. There's nothing wrong with either arrangement, it'll just take some getting used to if you're more familiar with the other configuration.

The zoom ring has deep rubber ribs and is about 7/8'' wide. The ring takes a ninety degree turn to go through its range of focal lengths, and requires only a slight amount (two fingers) of force to move it. There is a slight amount of lens extension as the lens is zoomed in and out. Zoom creep is not a factor with this lens.

The focusing ring is composed of deep rubber ribs of a different texture than the zoom ring, and is slightly thinner at 3/8'' wide. The ring has soft stops at closest focus and at slightly past infinity, and takes roughly ninety degrees to go through its focusing range. Filters mounted on the lens do not turn with focusing operations.

The VRII system works very well: using the system will allow the average shooter to shoot at around 3.5 stops slower than usual. As with all Nikon lenses with the VR system, when you first slightly press the shutter button the VRII moves its correction lens with a slight click and you can hear a slight whirring as it operates while the shutter button is half-pressed. It also makes the same click when you release the shutter button. See our IS Testing results for more details on its performance.

The petal-shaped HB-53 lens hood has a ribbed interior, attaches to the lens with a bayonet mount and can be reversed for storage. When attached, the hood adds 1 1/4 inches to the overall length of the lens.

Nikon 24-70mm ƒ/2.8G IF-ED AF-S ~$1,700
Faster, sharper, and somewhat better in the other testing categories: however, chromatic aberration is handled slightly better with the 24-120mm. For just a few hundred dollars more, you get an extra stop of speed, but you don't get vibration reduction.

Sigma 24-70mm ƒ/2.8 EX DG HSM ~$900
Corner softness was a problem with the Sigma 24-70mm; on sub-frame, the Sigma produces sharper images at around the same apertures; on full-frame, the Sigma's corner softness is much more prominent. However, it's more consistent - nothing like the softness spike we note at 70-85mm on the Nikon. There's no VR on the Sigma, but for an extra stop of speed (ƒ/2.8 instead of ƒ/4), it's got a much lower price tag.

Conclusion
Nikon's produced a nice kit lens for full-frame bodies, though it's not without its caveats. The lens fared quite well in our tests, for the most part - the big problem is the wide open performance at 70 and 85mm, where it's quite soft indeed when used at ƒ/4. If you don't need to shoot at ƒ/4 - and by and large, with VR and the high-ISO performance of modern Nikons, you might not need to - then it's not really an issue.