The Olympus 12mm ƒ/2 ED M.Zuiko Digital was released in June 2011 alongside the E-P3 camera. The lens is designed to fit the micro four-thirds mount, and will not mount on standard four-thirds bodies.

As a four-thirds lens, it produces an equivalent field of view of approximately 24mm. It does not ship with its rectangular LH-48 lens hood - this optional accessory is not widely available in North America at the time of writing, and is rumored to cost approximately $100. The lens takes 46mm filters, and is available now for approximately $800.

Sharpness
The 12mm ƒ/2 is an excellently sharp lens. Wide open at ƒ/2, there's just a hint of corner softness, and stopping down to ƒ/2.8 reduces that almost completely. Tack-sharp results are available from ƒ/4 all the way to ƒ/11, where diffraction limiting begins to set in. At ƒ/16 we note some slight softness, and just slightly more at ƒ/22.

Chromatic Aberration
CA is slightly noticeable in this lens, in the corners; according to the test charts, it's more obvious when then lens is stopped down compared to wide open, but I think that's a symptom of corner shading slightly obscuring the color shift. If you take a look at the sample photos, you'll see slight magenta-green color shifts in areas of high contrast, but nothing to get overly worried about.

Shading (''Vignetting'')
There is some corner shading when the lens is set to ƒ/2 - the corners are 3/4 EV darker than the center at this setting - but at any other aperture, there is no corner shading to speak of.

Distortion
Distortion is about what you'd expect for a 24mm-equivalent lens - +0.5% barrel distortion in the corners, and easily correctable in post-processing if you like your straight lines straight.

Autofocus Operation
The Olympus 12mm ƒ/2 uses Olympus' MSC (Move-Still-Compatible) technology, making the lens fast and near-silent to autofocus; the lens focuses between close-focus and infinity in less than a second. Autofocus results can be overridden at any time by simply turning the focusing ring.

Macro
The lens does not provide any useful macro ability - at its close focusing distance of 20cm (around 8 inches) it provides only 0.08x times magnification.

Build Quality and Handling
The Olympus 12mm ƒ/2 M.Zuiko looks and feels like a premium offering, with an old-school aesthetic and all-metal construction. Being a micro-four thirds lens, it's not big, and not particularly heavy, either (4.6 oz), and it mates well to the PEN series of cameras. The size of the lens belies its complexity - its optical architecture is made up of a concoction of 11 elements in 8 groups, including DSA (Dual Super Aspherical), Aspherical, ED (Extra-low Dispersion), and Super HR (Super High Refractive index) lens elements. The diaphragm is made up of 7 rounded elements to provide pleasing out-of-focus results.

There are no switches or control surfaces on the lens other than the focus ring - all lens functions are controlled by the camera. The focus ring is an interesting design element of the lens. The ring is metal with raised ribs, about a 1/2-inch wide. The ring can be pulled backward from its default configuration to enter a manual focusing mode, which exposes a distance scale in feet and meters; a distance scale is omnipresent, but isn't of much use unless you pull the focus ring back to display the distance scale. There is no infrared index. The operation of the focus ring deserves a bit of explanation. In regular use, with the focusing ring covering the distance scale, the ring operates as PEN users are familiar with, moving the focusing element of the lens with a fly-by-wire system at a more or less constant speed, as well as activating the manual focusing mode of the camera and bringing up a magnified view on the LCD. When the focusing ring is pulled back, exposing the distance scale, the focusing speed is variable, dependent on how quickly the ring is turned. This emulates the feel of manual focusing, in that on a purely manual lens the lens will focus as fast as you turn the focusing ring. In addition, there's a little extra resistance when the ring is pulled back, offering a bit more fidelity to make small adjustments. Finally, in this mode the focusing limits are presented as hard stops - when you hit infinity focus or close-focus, the focusing ring will stop. This offers about ninety degrees of travel.

For a more detailed look on the lens' pairing with the Olympus E-P3 body, you may wish to read the Imaging Resource review. 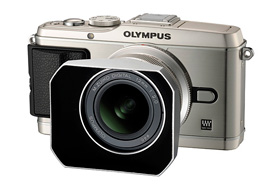 As mentioned, the lens hood for the 12mm ƒ/2 is a fairly pricey add-on, and we didn't have one for testing. The LH-48 is a slick rectangular hood, which slips on and is attached with a setscrew. It doesn't appear to reverse onto the lens for storage.

With the micro four thirds mount still relatively new on the camera scene, at the time of writing there's little in the way of alternatives.

Panasonic 14mm ƒ/2.5 ASPH LUMIX G ~$350
While not offering as wide a field of view (28mm equivalent instead of 24mm), the Panasonic 14mm ƒ/2.5 is less than half the size, weight and price of the Olympus 12mm. However, its performance is almost equivalent - for sharpness, it's a hair softer in the corners wide open, but that's about it. However there is somewhat higher chromatic aberration and slightly more corner shading. Distortion appears the same. The only other difference is that the Olympus offers a slightly wider maximum aperture - ƒ/2, instead of ƒ/2.5.

Olympus 17mm ƒ/2.8 M.Zuiko Digital ~$300
If you don't need such wide angle performance, the Olympus 17mm offers a 35mm-equivalent field of view, and is just one stop slower than the 12mm ƒ/2. It's not in the same league as the 12mm however: it's not as sharp, and chromatic aberration is fairly high. However, it's much less expensive, weighs significantly less, and is much smaller.

Conclusion
There isn't much to add here that the tests don't already say for themselves - the Olympus 12mm ƒ/2 M.Zuiko offers excellent results for sharpness in a quality package. The price might be prohibitive for some, but if you can afford it, you won't be disappointed.