Previous Story Olympus E-M1 Mark II Field Test Part I: The new top OM-D takes on the rain, snow and hail of Iceland
Next Story Cleaning up the streets of New York City - through Photoshop 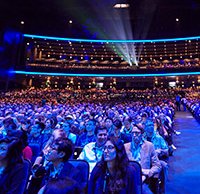 Adobe's 2017 Creative Cloud updates don't bring much to the table for Photoshop, but they do include a variety of interesting developments for Creative Cloud as a whole. Let's get the Photoshop improvements out of the way first. There are refinements to a variety of tools within Photoshop, including content-aware face liquefy, which will be improved by Adobe's machine learning artificial intelligence-based technology, which has been named Adobe Sensei. Liquefy itself is also faster now. Besides these improvements, which should continue over time if the machine learning works as advertised, Photoshop is also gaining a universal search tool, allowing users to easily find a wide array of content, including Adobe Stock assets, tools, tutorials and more. You can read more about updates to Photoshop, including to mobile applications, here. You can also scroll down to the bottom of this article to view a video showing some of the "hidden gems" in Photoshop CC 2017. It is sometimes the case that small improvements can make a big difference in your own workflow, so be sure to check it out.

Speaking of Adobe Stock, Adobe has announced a partnership with the news agency Reuters. Reuters is the world's largest international multimedia news provider and all of its image and video content will be available for view and use through Adobe Stock, including 60 million royalty-free commercial photos, videos and more. The integration, expected in the first half of 2017, will be made better by continued advances in Adobe Stock. For example, the Adobe Stock contributor site and integration we covered back in September is now available.

Let's go back to Adobe Sensei for a brief moment, as it is a very interesting technology that has the potential to greatly improve Photoshop in the future. Essentially Sensei is a framework, a set of artificial intelligence services, built directly into Adobe Cloud. With Adobe's massive library of assets at its disposal, Sensei continues to improve its automation skills. We have already seen the fruits of its labor via facial recognition, content aware technologies and camera shake reduction. Its latest efforts involve Adobe Stock Visual Search, Match Font and Face-Aware Liquify in Photoshop. Ultimately, as we move toward a future more reliant on artificial intelligence technologies, Adobe Sensei may well prove to be the driving force behind the biggest improvements we see in Photoshop and Lightroom. There are a few more interesting announcements being made at Adobe MAX that might interest photographers and visual artists. There's a new design tool being made available, Project Felix, which aims to allow users to easily create photo-realistic mockups using both 2D and 3D assets. It looks pretty cool and a beta will be available later this year for CC users. Additionally, the mobile applications that have been available for iOS, including Photoshop Fix and Photoshop Sketch, are now available on Android.

Oh, and if you're feeling adventurous -- and have yet to see the final solution on Adobe Photoshop's Facebook page -- you can try your hand at this year's Photoshop Mystery puzzle.