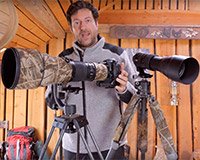 Demonstrating using his Nikon 600mm f/4 lens, Hilmer shows how when using a gimbal head, the large and heavy lens feels weightless. This is incredibly helpful when tracking animals through a scene, particularly when photographing birds in flight.

A gimbal head has some disadvantages, though, including its large weight and size. Further, it is not well-suited for shooting landscapes or close-up subjects. It also works very poorly with a lens which doesn't have a rotating tripod collar, as it's limiting in the way you can orient your camera.

A ballhead has some advantages, such as its versatility and the ease with which you can compose a scene, regardless of the type of lens you're using. The issues with a ballhead is that it's not as easy to shoot moving subjects. You must use more force to control your lens when shooting on a ballhead and it can be tricky to switch the camera from landscape to portrait orientation on a ballhead, as it can become very wobbly.