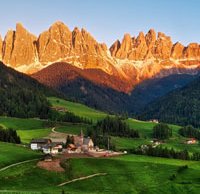 Skylum’s Aurora HDR software has long proven to be a popular choice for photographers creating and processing high-dynamic range (HDR) images. Aurora HDR 2018 was very good, but the Skylum team has been hard at work creating an even better version of the software, Aurora HDR 2019. The new version introduces an all-new AI-powered Quantum HDR Engine, which offers new tone mapping technology and promises more natural-looking and realistic HDR images.

Aurora HDR 2019 is the fourth major version of the award-winning Aurora HDR series and is the “most sophisticated” version since the software launched in 2015. While the software promises a lot of flexibility and user control, it also hopes photographers can quickly and easily merge files to create a realistic HDR shot with the press of a button. Quantum HDR, which tone maps using AI, analyzes and merges photographs automatically, whether you are working with bracketed images or building an HDR using a single file. When merging HDR images, there can be numerous issues, including burned colors, low contrast, halos and ghosting. The new Quantum HDR technology, which has been three years in the making, aims to reduce these issues by leveraging knowledge gained through a lengthy testing process. The Skylum developers tested thousands of different bracketed shots and the software refined itself over time through neural networks.

Of the release, Skylum co-founder and CTO Dima Sytnik says, “We are incredibly excited to get Aurora HDR 2019 into the hands of photographers from around the world. The results are so accurate and natural that the final images appear as though you’re looking at the scene with your own two eyes. Simply put, it’s HDR finally done right.” Part of creating these natural and realistic results involves a new HDR Smart Structure technology in Aurora HDR 2019. This tech gives you control over details, structure and sharpness and allows you to tweak them without introducing excess artifacts and making a shot that looks fake and artificial.

For photographers who want a bit more control but still want to have a nice starting point, Aurora HDR 2019 includes Aurora HDR Looks, which are signature styles created by various world-famous photographers, including Trey Ratcliff, Randy Van Duinen and Serge Ramelli. These are replacing “presets” and offer more refined toning and control, including the use of textures and masks. Aurora HDR 2019 is available for preorder now and existing users can upgrade for $49 USD. New users can preorder for $89. On October 4, when Aurora HDR 2019 releases to the public, the pricing will be $59 and $99 respectively. As a further incentive for preordering, you also receive a bonus pack until release, which includes a video tutorial by Trey Ratcliff, exclusive Aurora Looks, LUTs, a three month 500px Pro Membership, The Landscape Photography Handbook by David Johnston and $300 off a multi-day Iceland Photo Tour. Full details and preorder information can be seen here.

Stay tuned to Imaging Resource this fall for a full hands-on review of Aurora HDR 2019.