Previous Story Composing reflections: Behind the scenes in the Canadian Rockies with photographer Adam Gibbs
Next Story Color correcting skin in Adobe Photoshop through the use of a reference image

A lens made from ice? Mathieu Stern shaped natural ice into a one-of-a-kind optic 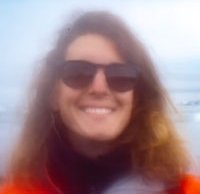 French photographer Mathieu Stern has been featured here on Imaging Resource many times for his proclivity for adapting rare and unusual lenses to his Sony mirrorless cameras. Today’s adapted “lens” may be the strangest one he’s ever used, ice.

For the last two years, Stern has had the idea in his head to use ice instead of glass as a camera lens. After all, if glass could focus light, ice might be able to do it too, right? Stern was visited Iceland and made a trip to the country’s famous “iceberg beach,” the Jökulsárlón glacial lagoon. Overnight, there had been a large storm which washed up a lot of pieces of ice along the beach and Stern spent six hours working on finding clear ice and then shaping it into half spheres. There are some unsurprising challenges, for example, the ice melting and the ice breaking as you try to shape it. You need to keep the ice cold enough to stay frozen, which makes it even harder to shape. Stern placed shaped ice inside a lens housing he 3D printed and brought from home. Let’s see how it all came together in the video below.

The clip at the beginning of the video above is the only clip Stern was able to record using his ice lens and all the photos were captured during the final minute of the last ice lens’ lifetime. For the curious, he did manage to keep the inside of his camera dry the entire time, which is an impressive feat in and of itself. Even though the photos are blurry, Stern is happy with them because they were the result of a lot of planning and dedication. “This project is a scientific, artistic and poetic project…I was amazed by the strange beauty of the images I made with the first ever 10,000 year old lens.” For more content like this, be sure to visit Mathieu’s website and his YouTube channel.

Tweet
Comment
Previous Story Composing reflections: Behind the scenes in the Canadian Rockies with photographer Adam Gibbs
Next Story Color correcting skin in Adobe Photoshop through the use of a reference image