Previous Story The best overall camera and lens combination for under $500
Next Story Raw vs. JPEG: Street photographer Eric Kim on why you should stop shooting raw

Learning to color: Can artificial intelligence accurately colorize your black and white photos? 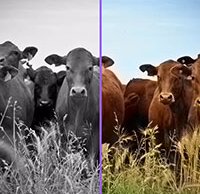 There's plenty of demand for colorization of black and white photos. There's even a subreddit dedicated to adding realistic color to old black and white images. It can be a time-consuming process and you need to be very familiar with Photoshop -- or similar software -- to do it convincingly. However, Algorithmia has implemented the Colorful Image Colorization algorithm created by Richard Zhang, Philip Isola and Alexei A. Efros.

This algorithm automates the process of colorization by leveraging Algorithmia's cloud-based GPU network of hosted trained deep learning models. Deep learning is itself a fascinating and challenging field in computing. The idea is to create algorithms which can accurately model high-level abstractions that are typically exclusive to the human brain, such as recognizing and understanding how to accurately color a black and white image based on contextual understanding, for example.

The classification of objects in an image is something we take for granted, but is actually a very complex process. Its complexity is apparent when you demo the Colorize Photo algorithm. It's a fun website to try out, but it does struggle in certain scenarios.

Consider the cow photo below, which is one of the five sample images provided to demo. The colorization looks really good and it is basically believable. (This image, titled "Beef Portrait" is from the Wikimedia Commons, copyrighted by Alex Proimos, subject to the CC-BY-NC 2.0 generic license.) On the other hand, this black and white image of mine came out almost entirely wrong. The leaves were recreated as green, so that's good, but the rocks and water came out with a sepia tone. It isn't surprising that the algorithm has limitations -- it's being asked to perform a very complex task. However, it is yet another step forward for deep learning. Try putting some of your own images into the system and see what comes out.

Tweet
Comment
Previous Story The best overall camera and lens combination for under $500
Next Story Raw vs. JPEG: Street photographer Eric Kim on why you should stop shooting raw