Previous Article Canon: 4K may not really matter, but you make it seem like it matters by insisting on not including it
Next Article It’s time to stop living under the illusion Adobe cares what you think 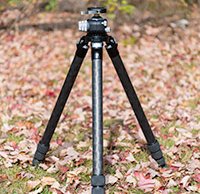 I've owned my Really Right Stuff TVC-34L Versa Series tripod for a few years now and have hundreds of hours of use in the field with the 34L. I have put this tripod through its paces in many different situations and it has held up very well and has never once disappointed me.

It's worth stating on the front end that this tripod is a premium product and with that quality comes a high price point. The TVC-34L tripod itself, not including a head, is just under US$1,100. The carbon fiber tripod is pricy, but it is built to last and is the best tripod I have ever used. If you need the best in support, it comes at a steep cost. The Really Right Stuff TVC-34L is a very sturdy tripod. This stability is particularly important when working with high-resolution cameras such as the Fujifilm GFX 50S or new Nikon D850 (which captured the shots for this review).

The tripod is very lightweight at a bit under five pounds (2,146 grams) considering its maximum height of just under six feet and its 50-pound (23 kilograms) load capacity. Beyond its good height (you can save some money by getting the regular TVC-34, by the way, which has maximum height of 58.5 inches (148.6 centimeters)). The TVC-34L not only gets high, it can also get very thanks to the lack of a center column. The legs can be extended upward to be basically parallel with the ground. The official minimum height is 4 inches (101 millimeters). To help support weight even when at its minimum height, the tripod has offset leg joints and the ratcheting leg angle stops are very well-built and sturdy. The TVC-34L is the "long" version of the TVC-34 Series 3 tripod. You can see it at its maximum height here.

It can also get very low, four inches off the ground to be specific.

No tripod is perfect, and if I had one complaint about the functionality of the TVC-34L tripod it would be that it's a bit long, even when the legs are all the way in. Its folded length is 24.4 inches (621 millimeters), which of course gets even longer when you add a head to the tripod - more on that later. Nonetheless, it is a very versatile tripod and I have reliably used it through its entire height range. With four leg sections, the TVC-34L is still quite long when folded up. It fits well on my personal backpack, but it is too long for smaller backpacks and bags.

Speaking of use, the Really Right Stuff TVC-34L has easily handled every situation I've thrown at it and has only minor cosmetic wear after a lot of travel and photo expeditions. I've used it on coastal beaches many times and it's been partially submerged in ocean water. It's been in several blizzards and near-freezing water and performed well. The tripod has been in deserts, forests and basically everywhere in between. Never once has its rubberized twist grip leg extension locks stopped working nor have any of the difficult conditions slowed it down whatsoever. The tripod is expensive in part because you're paying for quality and durability. The carbon fiber tripod stands out from the crowd. It has also proven to be very resilient.

The twist grip leg extensions are awesome. They are made from a textured semi-hard rubber and they allow for very fast, easy adjustments of the legs. Compared to my old tripod, which utilizes levers to lock the legs, the twist grip system is so much better. When working on uneven terrain, to be able to adjust tripod legs in a split second is fantastic. The tripod has a built-in spirit level as well to help you (my tripod head has one too) keep your gear level. The twist grip leg extensions work awesome. The rubber is grippy and easy to use even when wearing gloves or when the tripod is wet. It takes only a small rotation to unlock the leg.

While maintenance on the TVC-34L is rarely required, I have taken the tripod apart a couple of times to clean out the leg locks and the interior of the carbon fiber legs. I'm happy to say that it's easy to take apart the TVC-34L and put it back together as good as new. This is great because that means you can replace most any parts that may break. I haven't broken anything myself, but it's nice to know that if I do, I can likely fix the tripod without having to send it away for repairs. The TVC-34L comes with hard rubber ball feet, which work very nicely across a wide range of situations. Mine show very minor wear and work as well as they did when I bought the tripod. You can unscrew and replace the tripod feet if you'd like, I have a trio of spikes and also clawed metal feet for my TVC-34L tripod which come in handy as conditions vary.

At the other end of the tripod is the head, which is not included although Really Right Stuff does offer packages which provides some savings. In my case I went with the BH-55 ballhead, which includes a lever release for attaching the camera and a trio of knobs, one for adjusting the tension of the ballhead and the other for moving it along the base, which is detailed with degree markings. The largest of the three knobs is for repositioning and stabilizing your camera and the metal textured finish works very well, even when wearing winter gloves. The ballhead is sturdy and works great. In one motion you can make near-infinite adjustments. It is a much faster system than 3-axis pan-tilt tripod heads, although you can of course purchase that style to use with the TVC-34L if it's better for your workflow. Overall, the Really Right Stuff TVC-34L tripod is a fantastic camera support system. It has a very low minimum height, which is very useful in my work, and yet offers a good maximum height too. It's very sturdy and rugged. The great performance and features comes at a high cost, but the tripod is worth every penny and then some.

Note: In the time since I purchased my tripod and ballhead from Really Right Stuff, the company has updated its logo. Further, my ballhead has slightly different knobs than the current BH-55 ballhead. The overall functionality appears to be essentially unchanged.

Tweet
Comment
Previous Article Canon: 4K may not really matter, but you make it seem like it matters by insisting on not including it
Next Article It’s time to stop living under the illusion Adobe cares what you think