The Olympus M.Zuiko 12-50mm ƒ/3.5-6.3 was announced at the end of 2011. The lens was designed to fit the micro four-thirds mount, and offers a wide-to-short tele equivalent range of 24-100mm in 35mm film terms. In March 2012, Olympus offered a firmware update to version 1.1 for the lens, improving various aspects of the lens' performance. This lens isn't a "constant" lens, in that as you increase the focal length, the maximum aperture size decreases, though the minimum aperture size stays the same. The following table reflects the change in aperture available for the lens:

The lens takes 52mm filters, but does not ship with the LH-55B lens hood. The lens is available now for around $500.

Sharpness
The 12-50mm provides excellent results for sharpness: used wide open at 12mm, the lens provides a sharp center and just slightly soft corners; it's basically as sharp as it will get at ƒ/3.5, only getting very slightly better when stopped down to ƒ/4. Stopping down any further doesn't provide any further gains. In the mid-range of 25mm, the lens shows its best results: it's tack sharp at 25mm and ƒ/5.1, and remains so until diffraction limiting begins to set in at ƒ/8. If there is a weakness to this lens, it would be at the 50mm point, where the lens isn't as tack-sharp as other settings and the maximum aperture is a comparatively slow ƒ/6.3. It still provides very good, if not excellent results, and one only need to stop down to ƒ/8 to get a slight improvement.

Diffraction limiting sets in at ƒ/8 with this lens, but there is no noticeable impact on sharpness until ƒ/16, and more so at ƒ/22.

Chromatic Aberration
There is a bit of a story with chromatic aberration, and it is most obvious at 12mm, where the corner performance numbers are off the chart. It's summarized with this crop from our viewfinder accuracy chart: 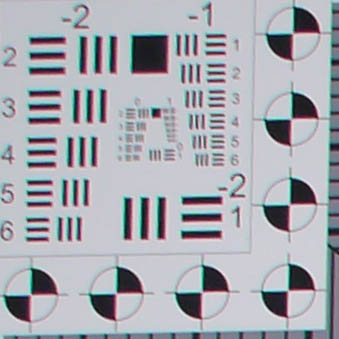 This ranks as some of the most dramatic chromatic aberration we've ever seen in a lens, and it's important to note that this is with the camera's automatic chromatic aberration correction operating. While in-camera CA correction can sometimes work wonders, in this case, the Panasonic GX1 test body could correct only some of it, leaving quite a bit in shots captured at 12mm. Your mileage may vary, depending on the camera body you're using, but our admittedly elderly former test body (an Olympus EP-1) had more trouble knocking down the CA than did the GX1. Bottom line, unless your camera has some really major CA-reducing chops, you're going to see a lot of CA in your shots taken at 12mm. The good news is that CA comes down to much more reasonable levels as you zoom towards longer focal lengths: as you can see in our sample images.

Shading (''Vignetting'')
Corner shading is only noticeable when the lens is used at its widest aperture (12mm), and even then, the extreme corners are only a third of a stop darker than the center. Stop down the lens slightly, and corner shading becomes negligible.

Distortion
Distortion is kept to a minimum, presumably with some help from an embedded lens profile. At the 12mm mark the lens provides some light barrel distortion, that disappears when the lens is zoomed in to the 25mm mark.

Autofocus Operation
The Olympus 12-50mm ƒ/3.5-6.3 M.Zuiko is very fast to autofocus, taking less than a second to go through its entire focusing range. The lens adopts the new MSC (Movie & Still Compatible) design, making it ideal for use in both still and video applications. The front element does not rotate when focusing, making life that much easier for polarizer users.

Macro
The lens offers a special macro focusing mode, which is accessible by pushing on the Macro button on the lens while pushing the zoom ring all the way forward. When in Macro mode the zoom is disabled and fixed to 43mm. The focus ring operates smoothly and is fly-by-wire; in this mode, the lens offers 0.36x magnification and a minimum close-focusing distance of 20cm, or 8 inches.

Build Quality and Handling
The Olympus 12-50mm ƒ/3.5-6.3 M.Zuiko is an all-plastic lens, quite long and skinny. The lens mounts well on the OM-D E-M5, and is available in a matte black finish. The plastic filter threads take 52mm filters, and the body mount is metal. There is no distance scale, depth-of-field scale or infrared index, however, when in E-Zoom mode the lens' focal length will display on the camera LCD. The lens offers a button marked L-Fn, which allows the user to assign a function to the button from the camera; this functionality is supported in the OM-D E-M5 camera, but we're not certain about other cameras.

The zoom ring is an inch and a quarter wide, plastic with alternating raised ribs sections that run lengthwise to the lens. The ring turns about 90 degrees through its range of focal lengths, and is quite easy to turn. There is no lens extension as the lens is zoomed out towards the tele end, thus, zoom creep isn't a factor with this lens. The lens features Olympus' new MSC technology, offering a very silent zoom operation which is very useful during movie capture.

As mentioned in the macro mode section, the zoom ring also moves forward and backward throughout three positions, which offer different functionality for the lens. In the rear position the lens offers standard mechanical zoom operation. If you push the zoom ring forward one position you are in E-zoom mode: This is the fly-by-wire zoom with two speeds, useful when you want to zoom smoothly while shooting video. If you push the zoom ring forward while holding down the MACRO button, you enter the dedicated Macro mode, where the lens is fixed to a zoom position of 43mm.

The focus ring is located at the end of the lens, an indented plastic ring that's 3/8-inch wide. The ring is a fly-by-wire design, controlling focus electronically, so there are no hard stops at either the infinity or close-focus ends. Given that focus is electronically controlled, you can assign the direction of focus to be either left or right. The front element doesn't turn during focusing operations.

Our sample didn't ship with the LH-55B lens hood, which is a rectangular-shaped, bayonet mounted model that appears to be able to reverse onto the lens for storage. The lens hood will run you $25.

Olympus 12-60mm f/2.8-4 ED SWD Zuiko Digital ~$1,000
With a MMF-series adapter, it's possible to mount regular Olympus four-thirds lenses on micro four-thirds bodies. This lens offers a significantly ''faster'' optic, in the sense that the maximum aperture at all zoom settings is at least a stop faster; on the E-510 camera body, the lens performed extremely well, offering very sharp results and great results for CA, corner shading and distortion. However it is double the price, larger and heavier, and does not offer the advanced zoom features found in the 12-50mm EZ.

Conclusion
As the kit lens for the OM-D E-M5, you couldn't really ask for more; the lens offers excellent results for sharpness, corner shading and distortion. The only sore point for the lens is the extraordinary chromatic aberration noted at the 12mm mark, but happily, it's really only noted in the extreme corners - it's very well-controlled in the central region of the frame, and in other focal lengths. And because image stabilization is present in the camera, taking movies with this lens is a pleasure, coupled with the advanced power zoom functionality.

Our senior editor Shawn Barnett discussed the lens in his review of the OM-D E-M5, which you can read here.