Tested on a Panasonic Lumix G3 body, the Panasonic 14-42mm f/3.5-6.3 G IS' performance was a little mixed, offering decent shake reduction, but with slightly unusual results at the telephoto end of its range.

At 14mm, IS performance was pretty typical, offering roughly 1.5 to 2 stops of improvement vs our results with the IS disabled. With the IS system active, nearly 50% of our shots came out sharp at an impressively slow shutter speed of 1/2.5 second. 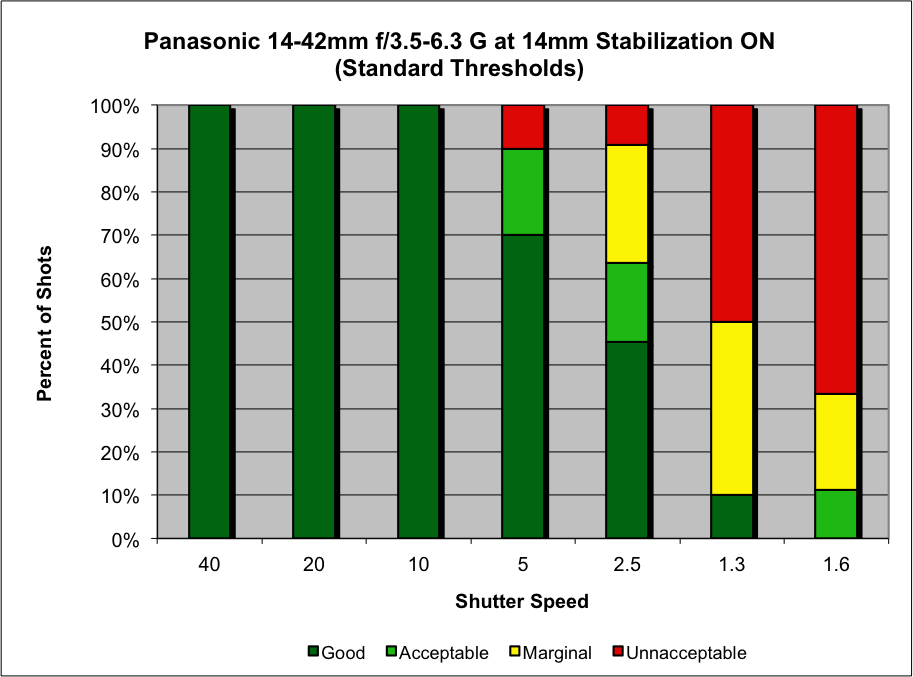 The results at 42mm were more dubious, with both IS-on and IS-off shots showing some blurring to surprisingly high shutter speeds: 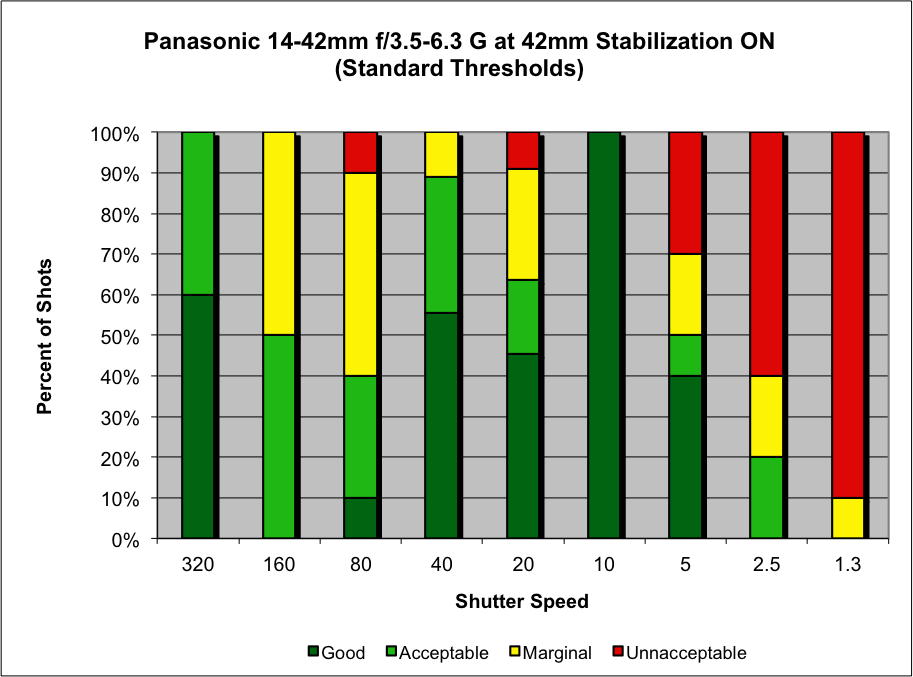 At 1/160 second and with IS on, 50% of our shots fell into the "marginal" category, the other 50% were just "acceptable"; none of the shots at that shutter speed achieved a "good" rating. This was actually a noticeably poorer result than we obtained with the IS turned off, although even our IS-off results were quite a bit worse than we'd normally expect for that shutter speed and focal length. We found this sufficiently unusual that we repeated the test several times, coming up with essentially the same results on each run.

If we could look past the poor results at higher shutter speeds, performance was actually pretty good at slower ones, to the point that 40% of our shots were sharp at an amazingly slow 1/5 second. In fact, if we looked just at the slower shutter speeds (1/40 and slower), the IS system provided a solid 3 to 3.5 stops of improvement over our unaided results.

The odd results prompted us to wonder how things would look if we were to formally relax our blur standards a bit, accepting blur values twice as high as we normally do for each of the categories of Good/ Acceptable/ Marginal/ Unacceptable. The results of this recomputation are shown in the graphs below.

At 14mm, results with the relaxed blur thresholds look pretty similar to those with the standard thresholds, just with everything shifted to the right by a half-stop or so. 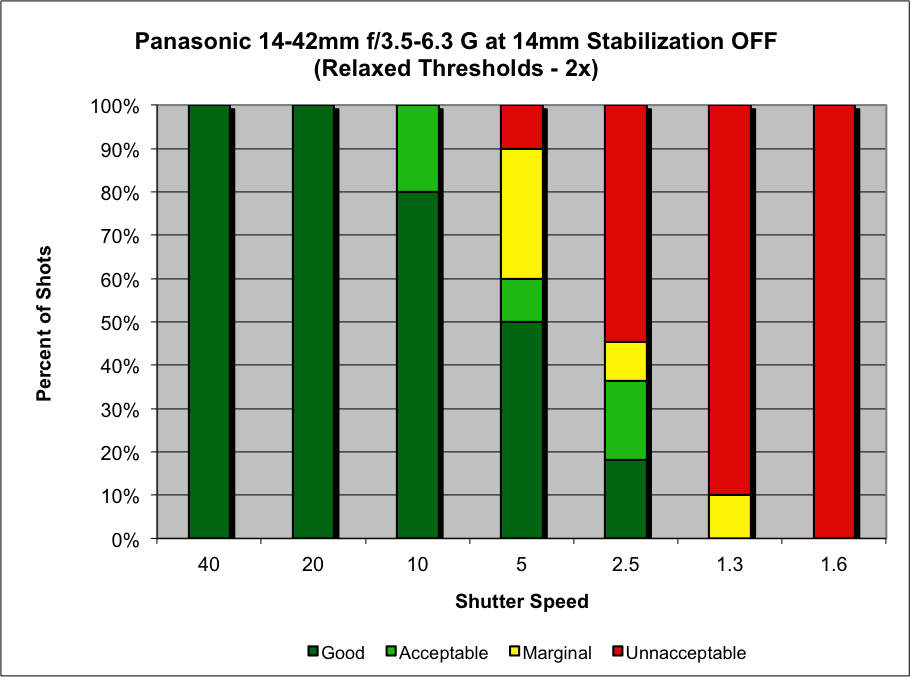 At 42mm, though, things clean up a lot. There are still some shots that are just "acceptable" at high shutter speeds, even with the relaxed standards, but we can now see dramatically better performance with the IS enabled; a very solid 3 stops beyond the IS-off results. 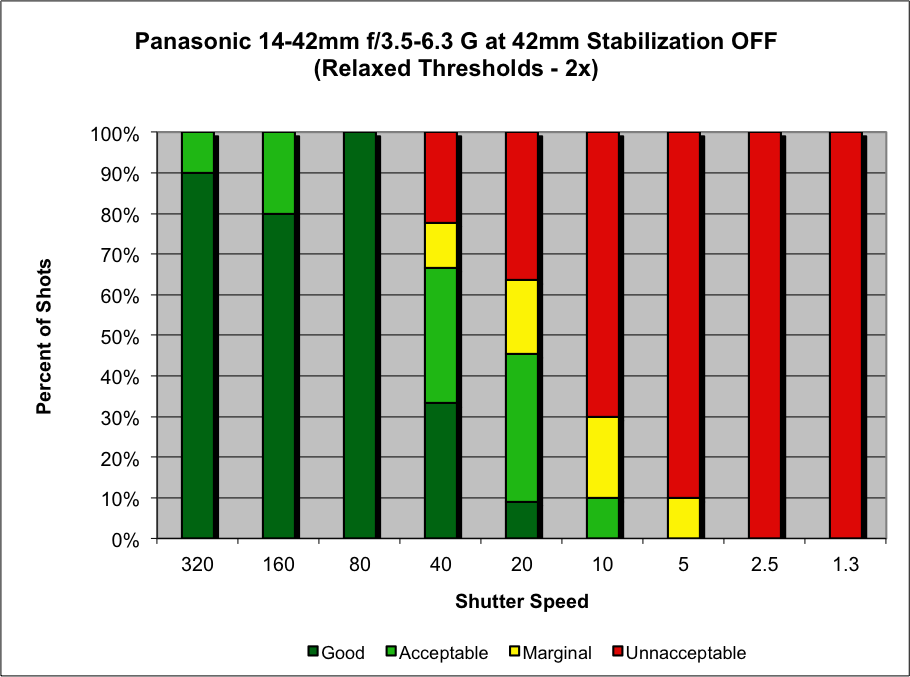 The bottom line, then, is that enabling IS with this lens will bring a slight but noticeable drop in maximum obtainable sharpness, even at higher shutter speeds where IS shouldn't even be an issue. If you can tolerate that slight drop in best sharpness, though, the lens will deliver very good results down to almost silly-slow shutter speeds.

This of course begs the question of just what's going on: Why did this lens' IS system so clearly impact best-sharpness performance? A related question is why did we find slight blurring in the non-IS results at such high shutter speeds?

Our theory is that, in common with other Micro Four Thirds cameras we've tested, the Lumix G3's shutter produces vibration that can cause blurring even at very high shutter speeds. The issue with Micro Four Thirds shutters (at least in cameras we've seen to date) is that the shutter has to snap closed before the exposure, and then open again for the exposure itself. This is in contrast to conventional focal plane shutters, which only have to move across the frame once per exposure. When a Micro Four Thirds shutter snaps closed to start the exposure, it can set off vibrations that affect the exposure. Because these vibrations can be at a fairly high frequency, they can cause blurring even at higher shutter speeds than one would expect. We've found that these vibrations can sometimes interact unfavorably with an IS system, with the IS system trying to correct for camera movement that isn't actually happening.

We first encountered this phenomena in the original Olympus E-P1, where the vibration was enough to cause a doubling of fine image detail at certain shutter speeds. Olympus later patched the E-P1's firmware to minimize the impact of shutter vibration on the IS system, which helped mitigate the problem. (You can read our exhaustive treatment of the Olympus E-P1 blur issue for a complete explanation of the phenomena.)

In the case of the Panasonic G3, the shutter-related vibrations were relatively small, so the decrease in sharpness in the IS-off case was fairly small also. Bottom line, if you only enable image stabilization when you actually need it (at slow shutter speeds) the Panasonic 14-42mm f/3.5-5.6 G provides a very useful level of shake reduction.

You can read more about our IS test methodology here: SLRgear IS Test Methodology, v2.