A compact, fun, all-in-one zoom lens that's ready for your next vacation

Although Sony's been on a tear lately these past few years with full-frame mirrorless cameras and lenses, their recently-announced 18-135mm f/3.5-5.6 OSS E-mount lens for APS-C cameras reaffirms -- at least for the time being -- their commitment to the APS-C sensor size. The 18-135mm, like many zoom lenses with the same focal length range, is an excellent travel companion lens. The lens offers a really versatile range of key focal lengths, from a wide-angle 27mm-eq. focal length at one end; classic 35mm-, 50mm- and 75mm-eq. focal lengths in the middle; and finally a 202.5mm-eq. telephoto option at the long end. Paired with a high-performance APS-C camera, such as the A6300 or A6500, the E-mount 18-135mm is a great all-in-one lens capable of all sorts of photographic or video subjects.

Along with other members of the photo press, I was recently given the opportunity to shoot with this new zoom lens for a few days in gorgeous O'ahu, Hawaii, at a variety of locations around the island. However, given the short time I had with this lens, this hands-on report will focus on the lens' handling, design and real-world image quality. Once we get a chance to see the lens again, we'll put it through our testing lab and update the review accordingly.

The Sony E 18-135mm f/3.5-5.6 OSS is amazingly compact and much more compact than similar APS-C 18-135mm zooms from Canon and Nikon, for example. Paired with the A6500, the lens is a perfect pairing in terms of size and weight. The diameter of the lens is practically identical to the A6500's height, and the camera and lens feel tailor-made for each other. It's a sleek combo that's easy to carry around throughout the day, or easily slip into a bag when not in-use. 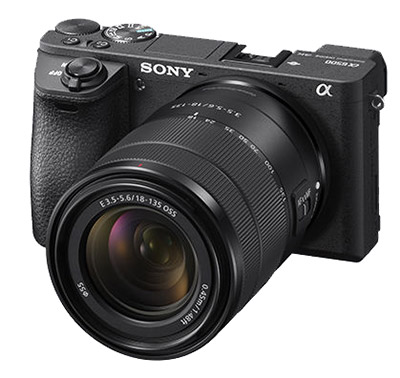 Regarding build quality, the 18-135mm feels pleasingly tough and solid, although, as mentioned, very lightweight. The lightness comes from using sturdy polycarbonate plastic for most of the barrel construction (the lens mount is metal, though). When zooming towards the longer focal lengths, the lens extends outwards about an inch or so, but far from enough to make the lens feel unbalanced. The zoom ring feels buttery smooth to operate. There's enough resistance to keep the lens where you set it (no chance for lens creep, especially given the small, lightweight lens elements inside) yet smooth enough to easily rotate with two fingers. Like most other E-mount lenses, the focusing is a focus-by-wire system -- the focus ring isn't mechanically linked to the focusing elements. It rotates freely with very little resistance.

One sticking point regarding the construction is that the 18-135mm lens is not weather-sealed -- at least to any noticeable degree; there's no gasket around the lens mount, for one. Paired with the dust- and moisture-resistant A6500, it would have been nice to have a similarly rugged lens. When asked about this, a Sony representative indicated that adding weather-sealing would likely have increased the price as well as the lens' size. In the end, I don't think it's a deal-breaker that this lens isn't weather-sealed; the small size and affordable price, I think, are more important. Sure, it would be nice to have that sealing, but I think most users of this lens are likely to shoot mostly during pleasant weather conditions.

While manual focusing is available if you need it, I found myself using autofocus 99% of the time. The 18-135mm f/3.5-5.6 OSS uses fast linear motor drives for AF functionality, which results in very fast and, for all intents and purposes, silent focusing. While using the A6500, AF speeds were super-quick and worked really well for both AF-S and AF-C modes. Every once in a while the lens would struggle to focus on areas of lower contrast or on very bright areas, such as the intense glare bouncing off the ocean from the sun at sunset. Most of the time, however, AF performed as expected.

The lens can also focus quite closely, up to 45cm (17.7 in.) at the wide angle, and while that's not as close as some of Sony's other versatile "travel zoom" lenses, it's still enough for decent close-up shots with some subject isolation against a blurred background.

Overall, the Sony 18-135mm f/3.5-5.6 OSS produces decently sharp photos, with minimal issues such as chromatic aberration and vignetting (with corrected images -- more on that shortly). Sharpness is quite nice throughout the zoom range even when shot wide open, though stopping down some will help make things a bit sharper.

Chromatic aberration and vignetting are quite minimal based on looking at real-world images. Aberrations such as purple fringing can appear in certain situations, such as along high-contrast, back-lit edges, as in this shot below for example:

However, one of the biggest optical issues I found was related to geometric distortion, particularly at 18mm, and its associated in-camera correction. On the A6500 I was using, the camera enables multiple* optical corrections by default at all times, so viewing the frame in the EVF and LCD I wasn't able to perceive the lens' inherent distortion uncorrected. (*On the A6500, you can disable shading and CA corrections, but distortion correction cannot be disabled.) In one instance, I captured a photo with a small object at the very edge of the frame; it wasn't visible to me in the EVF or the processed JPEG, yet it's visible in the uncorrected RAW file.

Overall, distortion from the 18-135mm is most pronounced at the wider angles, between 18-20mm, as well as at the longer end where I observed a little barrel distortion, even at 135mm. Middle focal lengths, between approximately 40-50mm, display very little distortion based on comparing uncorrected RAW files to their corresponding JPEGs.

Here's a comparision between a corrected and an uncorrected photo shot at 18mm:

Looking at the uncorrected RAW files shows just how much correction the camera is applying, as you can see dark, heavily vignetted corners where the image circle of the 18mm image doesn't cover the full area of the APS-C sensor. The in-camera JPEG processing stretches these corner areas out, eliminating the vignetting completely, though at the expense of sharp corner detail. I say "at the expense," but in reality, the extreme corners of the uncorrected images (which get cropped away by the distortion correction) are frankly much worse.

In addition to eliminating the black corners, the combination of distortion correction and standard JPEG sharpening throughout the rest of the frame introduces some strange image artifacts, particularly on small, fine detail such as foliage and grass. It's hard to know exactly what's happening with the JPEG images with regards to these rather unnatural-looking artifacts -- they appear almost as vertical and horizontal cross-hatching patterns -- but grass, foliage and other fine detail appear natural in the RAW files.

Taken from the above photo, check out the RAW vs. JPEG comparison crops below...

For what it's worth, a little speculation: Both natural and human-created objects (especially the latter) tend to have more detail in the horizontal and vertical directions than at other angles. Given this, emphasizing horizontal and vertical detail can make for sharper-looking prints, even though the pixel-level detail is distorted. We saw somewhat similar artifacts to what we observed here years ago, with Fujifilm's SuperCCD technology. That's a whole other story, but it was interesting that Fuji's algorithms for the SuperCCD also tended to produce horizontal and vertical artifacts in the images. Oddly, though, these tended to be much more visible on-screen, while prints usually looked quite a bit better. We're pixel-peeping pretty hard in the crops above, so will also play with printing some of the images from this article, and report back on how visible the artifacts are in printed output.

At the same time, it's a bit of a strange lens, as it sits in between quite a few other Sony zoom lenses that cover much of the same focal length range. For one, Sony's long had an 18-200mm f/3.5-6.3 all-in-one zoom lens. This one offers more reach than the 18-135mm, but it's also more expensive at around $850. Then there's the similarly-priced G-series 18-105mm f/4, which while not as versatile in terms of zoom reach, does offer a nice, constant f/4 aperture. Lastly, there's the pricey 16-70mm f/4 lens. This $1000, Zeiss-branded zoom offers a wider 24mm-eq. focal length than the 18-135mm, but it's not nearly as versatile in terms of reach, stopping at just 70mm (105mm eq.). Again, you have a constant f/4 aperture, though, which a lot of advanced photographers appreciate.

In the end, I guess it's rather nice to have lots of choices when it comes to picking a zoom lens for your Sony APS-C mirrorless camera. Beyond your standard 18-55mm/16-50mm kit zoom, the array of versatile zoom lenses come down to your budget or your focal length needs. At around $600, the 18-135mm f/3.5-5.6 OSS doesn't strain the budget too much, and its generous focal length range puts in in a nice sweet spot if you just want to carry a single lens. (Especially nice if you're traveling light, and/or are in dusty or wet environments and want to avoid swapping lenses as much as possible -- remember, though, this lens isn't weather-sealed.) Sharpness is quite nice, and while I'm a little concerned with the vignetting and distortion issues at 18-20mm, the 18-135mm is still a nice lens that captures pleasing photographs.

(From Sony lens literature) With broad zoom range extending from 18mm wide-angle to 135mm telephoto, the versatile lens covers a wide range of subjects and situations. It features compact, lightweight portability that maximizes the APS-C format E-mount advantage, as well as fast, precise, quiet AF operation that make it an excellent one-lens solution for day-to-day shooting.

Lightweight and compact design
Compact (E-mount APS-C format) and lightweight (11.5 oz [325 g]), this lens features an optical design optimized for short flange focal distances that makes it small and manageable on its own while also contributing to notable reductions in overall system size, weight, and portability.

Fast, precise, quiet focus
Advanced linear motor technology quietly drives the focus group with outstanding speed and precision, making the most of the high AF performance provided by the a6000 series. Accurate focus is more easily achieved for stills and movies, even with moving subjects.