Taking a closer look at the wildlife in your backyard: Nikon Small World in Motion winners announced 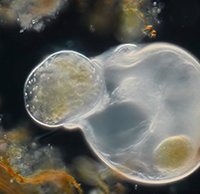 Nikon Instruments recently announced the winner and runner's up in their fifth annual Nikon Small World in Motion Photomicrography Competition, and there are some interesting images indeed!

With technological advancements, DSLR cameras have become better at recording video. These improvements encouraged van Egmond to start focusing more effort on video rather than just still photography. He enjoys capturing imagery of living organisms, so video is a great way to showcase them.

Wim van Egmond’s winning entry shows a ciliate attacking and consuming a smaller ciliate. The real-time footage shows creatures that van Egmond discovered in his own backyard. “Wildlife is so close to us, yet most of us never look close enough to see it,” van Egmond says, “A pool in your garden is actually a miniature underwater jungle teeming with life. If you want to see the world, your backyard is a great place to start.”

Watch the video below to see the winning entries in the competition.

(Seen via The Verge)