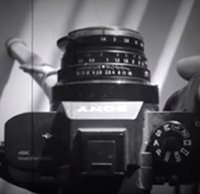 Techart has been making FE mount autofocus adapters for a few years, but now they are apparently also in the business of defying the limits of lenses.

This week announcing the creation of the world’s first Leica M-Mount to Sony E-mount autofocus adapter, Techart has managed to convert manual-focus Leica M-mount lenses into fully autofocusing lenses on Sony E-mount cameras, such as the Sony A7R II (our Best Overall Camera of the Year for 2015). Autofocus is achieved by physically moving the lens toward and away from the camera’s sensor plane, up to 4.5 millimeters. You can see the adapter in action in the video below, although the video is less than stellar quality.

Details of this new adapter have been published here and translated by a Sony Alpha Rumors reader, Chan, here. The adapter has thus far been successfully tested with seven M-mount lenses and is compatible with all M-mount lenses. Any lens that weighs over ten and a half ounces (300 grams) will need to be held, however. Aperture is controlled manually, but some basic EXIF data can be saved through the use of a companion application. The adapter supports both AF-S and AF-C and macro. Additionally, Contax CY-M and Leica R-M adapters can be used with autofocus.

There is no information yet on availability or pricing for Techart’s new M-Mount to E-Mount Autofocus Adapter, but to give you a potential idea as to the final cost, Techart's Contax G- to Sony E-mount AF adapter currently costs $263 USD on eBay. Techart is planning to send the adapter out to photographers for testing, so we should hear more as they reach that stage of development.