Focus on your ground game for Super Bowl 50, FAA bans drones within 32 miles of stadium 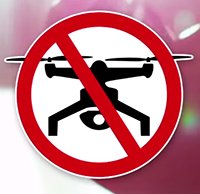 "Be a responsible pilot" and leave your drone at home for Super Bowl 50 in Santa Clara, California because Super Bowl 50 is a No Drone Zone this Sunday.

On Super Bowl Sunday (February 7th) from 2 p.m. to 11:59 p.m. local time, all unmanned aircraft operations within 32 miles of Levi's Stadium in Santa Clara, California are prohibited. In an effort to get the word out, the Federal Aviation Administration (FAA) has been sharing a video they've produced (see below) telling fans to bring their jerseys, face paint, and team spirit to the big game, but not their drone. The video has been making the rounds on Twitter (complete with the hashtag #NoDroneZone), Facebook, YouTube, and the FAA's website. Per FAA Administrator Michael Huerta, "We're working closely with our safety and security partners to spread this message as widely as possible."

For those of you thinking that these regulations are no big deal, think again. Per DIY Photography, the FAA may subject your illegally-flown drone to deadly force if it is determined to be a threat. I'm not sure what the threshold is for your drone being deemed a threat, so it's best to play it safe and keep it grounded for these ten hours on Sunday.

If you're not one to be on the lookout for FAA warnings on social media, the FAA has a free app that you can download, B4UFLY, which provides users with a status indicator about their current or planned flying location, information on the current status indicator, a planner mode, filtered maps, and links to regulatory information.