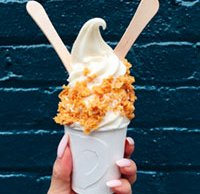 In case you didn't know (I didn’t), May is National Photography Month. To celebrate the occasion, Canon has just revealed some interesting results of a survey on current photography trends, including how highly we rate our own work.

As ways to share images online continue to increase, 64 percent of photographers surveyed are still "likely or somewhat likely" to print their photos.

Video is becoming popular with nearly a fifth of survey responders using their camera to record video that is published online.

A photo posted by Food Photographer (@danielkrieger) on

What's better than eating food? Apparently photographing it as 178 million photographs on Instagram are tagged with "#food" and 27 percent of those who responded to Canon's survey like to share photos of their food. Ice cream is the dish du jour for food photography as just over half of of the available food photos are of the delicious frozen treat.

In total, there were 1,004 U.S. general population respondents to the online survey and it was conducted by Toluna between April 21 and 26th. Check out the rest of the results here!