Previous Story Nifty fifty and four other pieces of gear every aspiring portrait photographer should have
Next Story Video editing: It’s not a game, but you can still apply your mad gamepad skills to make it much easier 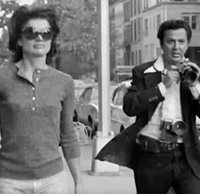 Robert Baggs at Fstoppers has compiled a list of ten must-see photography documentaries, noting that when he finds himself lacking in the inspiration department, watching a documentary on another photographer can help him get his creative juices flowing again.

One of the documentaries he lists is "Bill Cunningham New York", a 2010 profile of the New York Times fashion photographer who's known for his distinct style and street photography. Cunningham has received numerous awards and continues to regularly photograph in Manhattan, looking for people who express a unique sense of fashion and style. If you'd like to see the documentary and are an Amazon Prime member, you can find it for free on Prime Video.

Paparazzi photography, a genre which typically elicits disgust or anger, was pioneered by paparazzo Ron Galella. This New York City photographer is well-known for his various altercations with important figures including Jacqueline Kennedy and Marlon Brando, the latter of whom punched Galella in the face. The documentary "Smash His Camera" covers Galella's life and his relentless style of photography. Described as an "icon" and an "artist," he is also has also been called "despicable" and "the pricetag of the first amendment" in the trailer below.

Photography can sometimes shed an important light on a situation that would otherwise be unseen, such as in Zana Briski and Ross Kauffman's 2004 documentary "Born Into Brothels: Calcutta's Red Light Kids." This film is at times horrifying, and shows the red light district through the eyes of eight children whom Briski taught to use cameras.

To see the rest of the list of documentaries and their trailers, see the article at Fstoppers. If one of your favorites didn't make the cut, let us know about it in the comments below.

Tweet
Comment
Previous Story Nifty fifty and four other pieces of gear every aspiring portrait photographer should have
Next Story Video editing: It’s not a game, but you can still apply your mad gamepad skills to make it much easier