Previous Story Take back your EXIF data: What information is photo software discarding?
Next Story Tips from a travel photographer: Engage with the culture to capture more creative, distinctive photos

A look back at Kodak’s awkward first steps into digital photojournalism, the NC2000-series 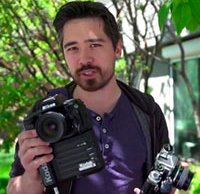 TheCameraStoreTV has recently started a brilliant Unsung Cameras of Yesteryear series (you can see their previous Unsung Cameras of Yesteryear video about the Fuji S5 Pro here) and this time they’re taking a look back at the Kodak NC2000e. They’re covering this interesting digital camera -- which was the first large sensor digital camera designed for photojournalism -- with the help of photographer Rob Galbraith.

The NC2000 series was a strange mashed up beast of a camera composed of a Nikon N90S (think a film version of a Nikon D500) and a Kodak digital back. The NC2000 packed a whopping 1.3 megapixels, which was quite revolutionary at the time. Besides its strange appearance and importance, the NC2000 is also notable for being designed in conjunction with the Associated Press.

Taking a trip down memory lane, the guys at The Camera Store talk with photojournalists who used the NC2000, including Galbraith. “Did you like this camera?” Chris Niccolls asks Galbraith in the video below. “No. No, absolutely not," he replies. "No. There was nothing to like about this as a shooting tool.”

Despite his negative feelings about the NC 2000 itself, Galbraith appreciated what it represented and the technology behind it. Sure, the camera itself was bad, but it was a harbinger of good things to come. To see a lot of sample images from the NC 2000e and hear more thoughts on the camera, check out the video above. Interested in the technical specs of what were then cutting-edge cameras? The Kodak NC-series models -- the NC2000, NC2000e, NC2000m and NC2000ir -- all utilized a 20.5mm x 16.4mm sensor which offered 1,268 x 1,012 pixel resolution. The sensitivity range was ISO 200 to 1600-equivalents, although Galbraith's experience suggests that going past ISO 400 with the NC2000 was not a good idea. The original NC2000 shot at two frames per second and had a buffer depth of five photos. The NC2000e, NC2000m and NC2000ir had an improved buffer depth of twelve photos due to a larger DRAM buffer. In addition to the Nikon N90s version, Kodak also offered an EOS-DCS 3 which combined an NC2000e back with a Canon EOS-1N body.

If you'd like to read more about the NC2000, Eamon Hickey wrote a retrospective back in 2005 for Rob Galbraith’s website. And if this unsung camera interests you then you should take a look at Mike Tomkins’ excellent compendium of wacky and weird cameras from earlier this month.

Tweet
Comment
Previous Story Take back your EXIF data: What information is photo software discarding?
Next Story Tips from a travel photographer: Engage with the culture to capture more creative, distinctive photos