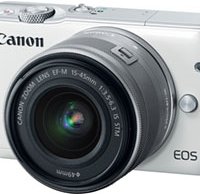 The mirrorless Canon EOS M10 is an easy-to-use interchangeable lens camera with intuitive controls. Through its use of an APS-C-sized, 18-megapixel sensor, the M10 delivers good image quality. But what about the rest?

My first impression of the M10 was that it looked good -- I'm field testing a white one -- but also very simple. This is a barebones camera body in so far as controls are concerned; you won't find a second command dial of any type or many buttons. Enthusiast photographers will likely find themselves frustrated by the lack of physical controls. You also won't find an electronic viewfinder -- or a means for attaching one -- on the M10.

I quickly found that the tilting three-inch rear display is your most essential method of interaction with the M10, and fortunately it works well. It is moderately sharp with 1,040,000 dots and its tilting mechanism appears to be well-built and sturdy. Autofocus performance is pretty good overall, although speeds don't seem particularly fast. You can choose from a variety of modes including a single point AF mode which offers you a selection of 49 points. The M10 employs Canon's DIGIC 6 image processor, which the company claims will help the camera provide much improved high ISO performance when compared to the EOS M2. The improvement should be roughly a two-stop improvement for both JPEG images and video, although nothing dramatic should be expected out of RAW images. Is the M10 a fantastic performer? No, not yet at least. It captures RAW images at just over four frames per second for only six total frames, for example, while its video capabilities top out at 1080/30p. However, it has to be considered in an appropriate context. It's a compact interchangeable lens camera that is designed for people stepping up to their first ILC and it can be found -- with a kit lens -- for right around $450 USD. I'm looking forward to working with the M10 more. Look for my field test in the coming weeks.