Self-taught in the cell: How photography helped a prisoner reform and find new ways to connect 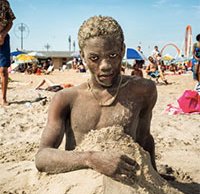 New York-based street photographer Donato Di Camillo actually became interested in street photography while confined within the walls of a medium-security federal prison. This wasn’t the first time the 47-year-old Di Camillo found himself on the wrong side of the law; his first arrest came at age 12 for theft.

After serving his 36-month sentence (Di Camillo was facing a maximum sentence of 20 years for his crimes associated with connections to the Colombo crime family) he was released to spend three years on house arrest and probation. During his stay in prison, Di Camillo read what photography magazines he could find in the library and studied lighting and art. His house arrest afforded him ample time to watch photography tutorials online and hone his technical skills.

One thing that house arrest didn’t provide him with was extensive subjects. He could capture macro shots of bugs or food, but he wanted to be on the street capturing images of people. After his house arrest was finished, that’s exactly what he was able to finally do. His time back on the streets this time came with photographic knowledge and a renewed sense of appreciation for the society that he had once felt like an outcast from.

A photo posted by Photographer (@donato_dicamillo) on

The same feelings of being an outsider that in part led Di Camillo to a life of crime this time helped inspire him to turn his camera toward the people he identified with the most – the ones that society tends to look away from.

Di Camillo’s story of redemption is an inspiring one. While it’s no secret that photography can be a powerful tool to tell a story, Donato is an example of photography helping to rewrite a person’s own story. To read much more about him, see this article at the Huffington Post and this one written by American Photo Mag.

A photo posted by Photographer (@donato_dicamillo) on