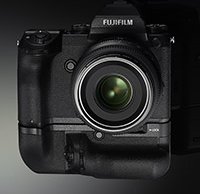 Fujifilm hopes that photographers will look back at Photokina 2016 as a game-changing event. Why? Because the Japanese company hopes to reinvent medium format photography with its newly-announced GFX 50S camera.

As a bit of background on the new mirrorless medium-format GFX system itself, we should take a look at a quote Fujifilm shared during its Photokina press conference. The late photojournalist W. Eugene Smith said "The world just does not fit conveniently into the format of a 35mm camera." Rather than try to force the world to fit into the full frame format, Fujifilm wanted to develop a new one: the GFX format.

The first G Format sensor is a whopping 70% larger than 35mm sensors with a 43.8 x 32.9mm sensor and Fujifilm hopes that it will capture the same spirit of bringing back the joy of photography that the X-series did when it launched in 2010, while providing ultimate image quality that smaller sensors simply cannot produce. The GFX 50S's sensor is brand-new and has been designed from the ground up by Fuji's research and development team and in-house engineers. The sensor is stated to provide vertical resolution as high as 4,700 lines. Of course we will need to confirm that in our lab when we can get our hands on a production GFX 50S camera, but if accurate it's an impressive spec indeed. The sensor features some interesting technology as well, including specially-shaped microlenses and a specially-optimized silicon production process.

The high-resolution sensor provides flexibility of aspect ratios as well. Natively, it is a 4:3 ratio image sensor, but it can be adapted to 3:2, 1:1, 4:5, 6:7 and 6:17 which provide images with fewer -- but still high -- megapixel counts. A 3:2 aspect ratio results in 45-megapixel images, for example.

Paired with the 51.4-megapixel medium format sensor is a new X-Processor Pro imaging processor, although we don't currently have any details on the processor or what sort of continuous shooting specifications we can expect with the Fujifilm GFX 50S.

While it is often noted that a mirrorless camera design allows cameras to be made smaller and lighter -- which the Fujifilm GFX 50S certainly is -- it is also the case that a mirrorless design is better for image quality, which has been Fuji's primary concern when designing and engineering the GF-X series. As a result of internal testing, Fuji found that using a mirrored camera design decreased image resolution by 15%. The issue of mirror shock decreasing image quality increases as you increase the sensor size, so opting for a mirrorless design was an easy decision. In addition to maintaining high image quality, the mirrorless design allowed more flexibility when designing the new line of Fujinon GF lenses (more on those later).

The Fuji GFX 50S camera body is surprisingly compact for a medium format camera, due in part to its mirrorless design. Fuji states that the camera's height is about 20% lower than 35mm full-frame SLR cameras, and it is lighter too, with a weight less than two pounds.

Its relatively small size doesn't mean that it skimps on the physical controls Fuji shooters love on their X-series cameras, however, as it utilizes a similar twin-dial design on the top of the camera with one dial dedicated to shutter speed and the other to ISO sensitivity. Unlike all previous X-series cameras, the GFX 50S has a display on the top of the body, displaying basic settings.

On the back of the camera, we find a three-way tilting LCD, much like what is present on the recent X-T2. To the right of the display are numerous buttons, including an eight-way focus lever (joystick). The Fuji GFX 50S's viewfinder is particularly interesting, as it is detachable. The optional electronic viewfinder comes in the box with the 50S, and it attaches via the camera's hot shoe. It's very compact and doesn't disturb the overall design of the camera. You can even place optional accessories between the camera and the viewfinder, including one that Fuji showcased during its Photokina presser that gives the user the ability to move the viewfinder up-and-down and side-to-side, providing photographers with additional flexibility.

And that flexibility is clearly a focus for Fuji with the GFX 50S, as evidenced by its allowing the camera to be used with an external display via HDMI output. Additional accessories that will be available at launch to augment the GFX 50S body include a vertical battery grip. Fuji is quick to note that like many medium format cameras, the GFX 50S will be fully supported with tethered shooting at launch as the company continues to work with different software manufacturers.

With the relatively compact camera size comes the ability to easily take it with you on a variety of photographic adventures. Fujifilm wants you to feel confident in the camera's ability to deal with a wide variety of conditions, so it has made the GFX 50S weather and dust resistant and capable of operating in temperatures as low as 14 degrees Fahrenheit.

As mentioned above, we don’t currently have many details on the shooting specifications and features of the new GFX 50S. It is unknown what the camera's ISO sensitivity range is, what sort of autofocus system it utilizes, the type of technical performance we can expect or even if the camera can record video.

By utilizing a mirrorless design, the new G mount has a short flange back distance of a mere 26.7 millimeters. This shortens the back focus distance as much as possible and will help to prevent vignetting, allowing Fuji's new lenses to capture images that are sharp from edge-to-edge.

Speaking of sharpness, Fuji knew that to take full advantage of the higher-resolution medium format sensor, lenses had to be optically improved and be held to higher standards. Rather than design them solely for the GFX 50S, Fujifilm's new GF lenses are expected to last for decades, and to be optically sufficient for sensors which exceed 100 megapixels. All six of the new lenses will include an aperture ring and a new C (command) position on the ring which allows users to perform aperture adjustments using the command dial on the GFX 50S. Like the camera body, the lenses will include weather and dust resistance and be able to withstand temperatures as low as 14 degrees Fahrenheit.

Specific availability information is not yet available for any of the newly-announced GFX products, but we do know that the Fujifilm GFX 50S and three launch lenses are expected to arrive in the U.S. in early 2017 with the other three lenses arriving by the end of the calendar year. Pricing will be available at a later date, but Fujifilm is targeting a rather aggressive price point "way under US$10,000" for the GFX 50S body, 63mm f/2.8R WR lens and external viewfinder. To put that target into context, the Hasselblad X1D body costs just under $9,000 with the two launch lenses selling for around $2,300 and $2,700.