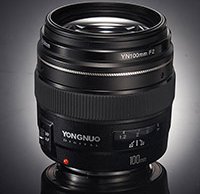 Hong Kong-based Chinese company Yongnuo has been manufacturing inexpensive photography equipment for over a decade. Although most well-known for their speedlights, they have made a handful of lenses as well, including a 35mm f/2 and 50mm f/1.8 for Canon and Nikon mounts. Yongnuo has now announced their longest lens to date, a 100mm f/2.

Photo Rumors is reporting that the full-frame, autofocus 100mm f/2 has nine aperture blades, a 58mm filter size and weighs somewhere between 400 and 500 grams, which puts it right around a pound. The Canon version of the lens is the only one that we have information or images for, and it looks similar to the Canon 100mm f/2 lens, which sells for around US$500. Following the pattern established by its prior lens releases, the Yongnuo 100mm f/2 will be an inexpensive alternative to the name-brand lens and will sell for around $170. If you would rather not get it from AliExpress, the lens will likely be on Amazon shortly.

What about the Nikon version? Nikon Rumors is reporting that it should be out in the next few months. Unfortunately, Yongnuo has not produced lenses in mounts other than Nikon and Canon. In the meantime, check out the MTF charts, lens diagram and product shots below.