Previous Story Panasonic steady at the helm, says firmware fix incoming for G85 image stabilization issue
Next Story Taking flight and bringing home the bacon with a Fuji X-T1, a Nikon D810 and a Sony A6000

Supermoon roundup: Shots from the latest supermoon and tips to help you capture the next one 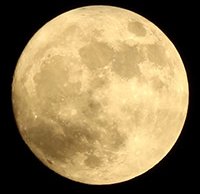 The internet is abuzz with "supermoon" talk as November 13/14 marked the closest and brightest supermoon since 1948. For a bit of background information, a supermoon is the "coincidence of a full moon or a New moon with the closest approach the Moon makes to the Earth on its elliptical orbit, resulting in the largest apparent size of lunar disk as seen from Earth."

We have selected a handful of our favorite images of the November 2016 supermoon that we've found on Instagram, which you can see below. But what if you want to capture a great shot of the supermoon for yourself? A variety of professional photographers recently shared their supermoon shooting tips with National Geographic, including NASA photographer Bill Ingalls. National Geographic staff photographer Mark Thiessen says that the first thing you should do is attach the longest lens that you have and if possible, add a teleconverter to it. Theissen shot a supermoon in the Moab Desert in Utah using a 600mm lens with a 2x teleconverter attached. Theissen remarks that it's important to shoot with a fast enough shutter speed to retain detail on the surface of the moon. If you treat it like normal low light shooting, the moon will be blown out.

Ingalls says, "Don't make the mistake of photographing the moon by itself, with no reference to anything." This is especially important when shooting a supermoon, as its size is the primary reason for shooting it. If your frame is just the moon, it will look the same size as any other photo of the moon. It is best to give the viewer a sense of scale.

Witness the beauty of the #supermoon in #Dubai right now! The Moon will be the closest it has been to the Earth since 1948, at a distance of 356,500 kilometres, which makes it appear 14 per cent bigger, and 30 per cent brighter. Today's #VisitDubai #Travelgram courtesy of @shadi_alrefai

A photo posted by Visit Dubai (@visit.dubai) on

A photo posted by Priscila Drummond Reis (@pridreis) on

A photo posted by EARTH FOCUS (@earthfocus) on

If you missed out on shooting the recent supermoon, don't worry, as you'll have another chance to shoot a very large moon tonight as it rises. You can look up moonrise times for your local area here. There will also be a third consecutive supermoon on December 14, so you'll get another chance at a super shot of a supermoon in 2016.

Tweet
Comment
Previous Story Panasonic steady at the helm, says firmware fix incoming for G85 image stabilization issue
Next Story Taking flight and bringing home the bacon with a Fuji X-T1, a Nikon D810 and a Sony A6000