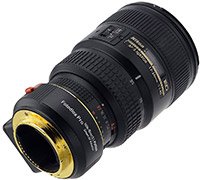 For Nikon shooters who want to use their glass on Sony E mount cameras, such as the Sony A7R II, or for Sony users salivating at the thought of mounting Nikon glass to their mirrorless camera, such as a Nikon 14-24mm f/2.8 or perhaps a very long lens (an area of weakness in Sony's overall impressive library of E mount optics), the Fotodiox Fusion Smart AF adapter for Nikon F to Sony E mount is now available.

The "Smart" in the product name comes from the adapter supporting full aperture control, autofocus, image stabilization, exposure metering and EXIF data. Additional features include guaranteed infinity focus capability on all Nikon lenses and aluminum construction with a 1/4-20" mount for supporting long, heavy glass. The US$350 adapter can be ordered here.

Photographers have been clamoring for a Nikon F to Sony E adapter for quite some time, in particular one that supports automatic functionality. Before the Fotodiox adapter, photographers have been relegated to using lenses in full manual modes and not having any sort of sophisticated electronic communication between Nikon glass and Sony E mount camera bodies. In the video below, you can learn more about the new adapter and see it in action. Without having used the adapter ourselves, we can't comment on how well it works in real-world use, particularly regarding autofocus speeds. Fotodiox does remark that autofocus works best when using Sony camera's phase detection autofocus, when possible.