Previous Story Canon joining the modern Japanese space race, although not in the way you might expect
Next Story Lightroom is powerful portrait editing software: Three start-to-finish retouching tutorials 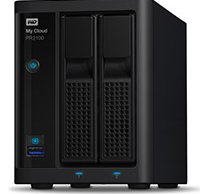 Backing up your photos is critically important and every photographer should have at least some form of a backup solution. Ideally, you have multiple local backups and something off-site. There are many options on the market for local backup, which one is right for you? PetaPixel’s Michael Zhang helps to answer that question in his review of the Western Digital’s My Cloud Pro Series PR2100.

The My Cloud Pro Series PR2100 creates a private cloud with a network attached storage (NAS) server, allowing photos to be backed up and worked on collaboratively, perfect for a studio environment. It’s a high-end device, to be sure, but that doesn’t mean it must be complicated to set up. In fact, Zhang remarks that it’s surprisingly simple. The PR2100 has two storage bays which are accessed via a straightforward locking tab system. He reviewed the 16TB version which was set up by default in a RAID 1 configuration. RAID 1 mirrors identical data across two drives so that if one fails, you can replace it and mirror all your data onto the new one from the functioning drive. This means that you have 8TB of working space rather than 16TB. For users particularly keen on safety, you can connect the drive to a second power source so that if one of them fails, you will not lose data to a single power supply failure.

A big draw of the My Cloud Pro Series is the connectivity with WD’s “My Cloud” service. Signing up for an account and connecting your device is a simple browser-based process. There is downloadable software available for a range of operating systems and devices. My Cloud works with Adobe’s Creative Cloud, Plex and more, allowing you to stream media from it simultaneously to a variety of devices.

To read Michael Zhang’s full thoughts and his final word on the Western Digital My Cloud Pro Series PR2100, read his review at PetaPixel. It looks to be a very appealing device for studios or for photographers who work across multiple devices. You can purchase an empty PR2100 and add your own drives for $400. The reviewed 16TB version costs around $900. There is also a 4-bay enclosure, the PR4100, available for $500.