Previous Story Checking color: A simple tool that will save you a lot of trouble and ensure that you capture accurate color
Next Story High Speed and 360: Dave E dishes 2016’s hottest camera tech 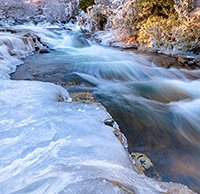 Sony's first full-frame A-mount camera since the original A99 in 2012, the Sony A99 Mark II, has arrived. We already have lab samples available for your viewing as well as some real-world shots from a Sony event in November, and we have now published our first Field Test for the new pro-level camera.

In Part I of the Field Test, the A99 II braves the Maine cold and tackles a variety of landscape situations. It impressed us greatly with its superb resolving capabilities, thanks to its 42.4-megapixel full-frame CMOS sensor. Further, it proved to perform surprisingly well in low light despite its high pixel count. The sensor is the same one found the in the Sony A7R II, so it is not surprising that the A99 II offers excellent image quality.

One of the characteristics that separates the A99 II from its mirrorless cousin is, well, a mirror, albeit a translucent one. This necessitates a larger camera body, but that does not mean that the A99 II is unwieldy. In fact, it proved to be quite the opposite, offering a wide array of physical controls and a very comfortable, redesigned front grip. Another aspect that helps separate the A99 II from the A7R II is the former's continuous shooting capabilities. The A99 II can shoot full-resolution RAW images at over 11 frames per second, making it a very speedy camera. To read much more about how the Sony A99 Mark II has performed in the field, check out the full Sony A99 II Field Test Part I here. Stay tuned for Part II, which will cover the camera's autofocus, video performance and much more!

Tweet
Comment
Previous Story Checking color: A simple tool that will save you a lot of trouble and ensure that you capture accurate color
Next Story High Speed and 360: Dave E dishes 2016’s hottest camera tech