“What if you had an intelligent assistant for photo editing?” Adobe asks, offering peek at the future 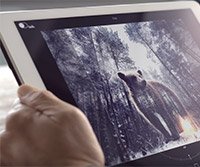 Adobe has announced that its internal research team is exploring the concept of an intelligent digital assistant. This digital assistant would utilize voice interaction in addition to an understanding of the creative workflows of Adobe’s users.

The speech recognition system in question can accept “natural user voice instructions for image editing either locally through on-device computing or through a cloud-based Natural Language understanding service.” The video below showcases what an intelligent digital assistant might look like.

This is merely evidence of a first step towards a “robust multimodal voice-based interface,” but it is an interesting concept. Admittedly, the video above doesn’t showcase complex image editing, but rather a simple crop, canvas flip and then undoing, but the ability to do those edits and then share an image to Facebook is something that would be particularly appealing to mobile users.

It is conceivable that Adobe could engineer a digital assistant to learn your preferences and then be able to intelligently apply edits that you would have performed yourself. A hurdle with voice recognition software is that it must work nearly flawlessly or else it very rarely ends up being faster or easier than doing something yourself. Hopefully users will be able to try out Adobe’s effort for themselves soon to see how it might fit into their workflow.