Capturing history as it’s made: The high-pressure task of the White House photographer 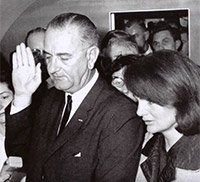 With a new president having taken office in the United States, that also means that a new official White House photographer will be taking over as well. DigitalRev In Focus explores the job and its history.

John F. Kennedy was the first US president to work with a full-time photographer, Cecil W. Stoughton. After Kennedy, all of the presidents except for Jimmy Carter have had an official photographer, although the position remains optional. The official White House photographer is tasked with following the president every day and recording events for official record and for the sake of posterity.

Pete Souza, who is leaving the White House for the second time having worked for Reagan from 1983-89 and more recently for Obama from 2009 through his leaving office last week, leaves a legacy of great images and an emphasis on using social media to give people an intimate look at the life of the president. Further, Souza illustrated the importance of the job, as he was regularly the only other person in the room with Obama, capturing key moments in his presidency.

It has not yet been decided who will be Donald Trump’s official chief White House photographer, but CNN reports that Shealah Craighead is currently at the top of the list and on “something of a tryout.” The job she is trying for is certainly unique and requires a blend of photographic skills in a very high-pressure environment.