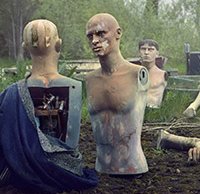 Andre Govia has made his career exploring a wide variety of abandoned places and capturing eerie photographs of dilapidated buildings and structures. Daily Mail recently covered Govia’s work, in particular his visit to an abandoned theme park.

While Govia didn’t disclose the location of the park, it appears that he visited Camelot Theme Park, an English resort and theme park which, unsurprisingly, was themed around Camelot. The park was opened in 1983 and operated seasonally until it closed its gates for the final time in late 2012.

Govia’s images from his journey through Camelot don’t tell the story of a whimsical middle-age land, but rather showcase what appears to be a battlefield from a war fought between mannequins. Lifeless mannequins, some still draped in thematic clothing and tufts of hair, are scattered around the overgrown land, various limbs piled around them. What was surely once a fun, bright place for children to explore is now downright creepy.

You can see a few images from Camelot below. You can see more in the Daily Mail’s article.

It’s incredible how eerie the images are despite being taken during the day. There is just something about mannequins. To see more of Andre Govia’s urban exploration work, visit his Flickr, Facebook and Instagram. He also has a book, “Abandoned Planet,” available for purchase from Amazon. The book is 240 pages of Govia’s explorations in over 22 countries and 800 different locations.