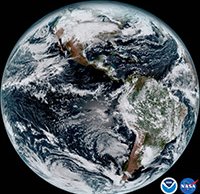 Update on February 1, 2017 at 5:00 PM EST: The GOES-16 is a NOAA satellite, not a NASA satellite as the first sentence of this article had originally stated.

The GOES-16 is the first National Oceanic and Atmospheric Administration’s (NOAA) satellite to be launched as part of their next-generation fleet of weather satellites. The GOES-16 was developed jointly with NASA, but is funded and operated by NOAA. GOES-16 was launched as GOES-R on November 19, 2016 from Cape Canaveral Air Force Station in Florida. Earlier this week, NASA announced the release of the first high-resolution images from the GOES-16’s Advanced Baseline Imager (ABI) instrument.

The ABI uses multiple spectral channels to capture images, which are then used to create a composite image. A full disk image of the Earth can be captured every 15 minutes, with an image of the continental U.S. captured every five minutes. The ABI can also target specific areas which are experiencing severe events with environmental phenomena, such as hurricanes, wildfires, volcanoes, etc. and capture high-resolution images every 30 seconds.

Compared to the GOES-13, the current-generation imaging system, the GOES-16 covers the Earth five times faster and has four times the resolving capabilities, allowing scientists and meteorologists unprecedented ability to see the Earth’s weather systems and atmospheric conditions. Stephen Volz, Ph.D., NOAA assistant administrator for Satellite and Information Services said of the GOES-16, “The incredibly sharp images are everything we hoped for based on our tests before launch. We look forward to exploiting these new images, along with our partners in the meteorology community, to make the most of this fantastic new satellite.” This composite color full-disk visible image of the Western Hemisphere was captured from NOAA GOES-16 satellite at 1:07 pm EST on Jan. 15, 2017 and created using several of the 16 spectral channels available on the satellite's sophisticated Advanced Baseline Imager. The image, taken from 22,300 miles above the surface, shows North and South America and the surrounding oceans. Credit: NOAA

Louis W. Uccellini, Ph.D., director of NOAA’s National Weather Service follows up, “The image is much more than a pretty picture, it is the future of weather observations and forecasting. High resolution imagery from GOES-16 will provide sharper and more detailed views of hazardous weather systems and reveal features that previous instruments might have missed, and the rapid-refresh of these images will allow us to monitor and predict the evolution of these systems more accurately. As a result, forecasters can issue more accurate, timely, and reliable watches and warnings, and provide better information to emergency managers and other decision makers.”

On the left is a color-composite full-disk image from NOAA's newest geostationary weather satellite GOES-16 (located at 89.5 degrees West longitude), which was created by combining data from the ABI's 16 spectral channels. By comparison, the imager aboard GOES-13 has just five spectral channels, and their data cannot be combined to produce color composites with this "true color" effect without the inclusion of additional data sets. Credit: NOAA

The next spacecraft in the next-gen series of imagers for the NOAA, GOES-S, is expected to launch in spring 2018. After successfully passing its orbital tests, GOES-S will be renamed GOES-17. To see more images from GOES-16, see here.