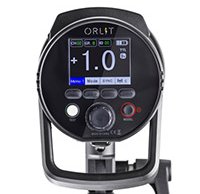 Adorama has announced Orlit, its new line of TTL flash products. The Orlit line consists of the Orlit Rovelight RT 610 TTL Wireless Monolight, which is the first monolight to include Canon’s RT radio system built in; the Orlit-RT-600C TTL Speedlight for Canon; and two transceivers for Canon and Nikon systems, the TR-611C and TR-612N.

The Orlit Rovelight RT610 TTL Wireless Monolight is a 600ws monolight which has a guide number of 201 (feet at ISO 100), manual power levels with 0.1-stop adjustments and 20 watt LED modeling lamp with 3200K color temperature. The high-speed sync mode allows shutter speeds as fast as 1/8000s. An additional “freeze mode” can be used with shutter speeds up to 1/19000s.

Canon users should enjoy using the Rovelight RT610 as it has radio-based and infrared remote flash options for Canon RT users, even allowing a Canon 600EX-RT to act as a master with the Orlit RT610 as the slave. This isn’t to say there’s nothing here for Nikon users as the RT610 works with Nikon’s wireless flash system as well.

Exclusively for Canon users, Adorama’s new Orlit RT-600C TTL Speedlite is Canon RT/ETTL compatible and can act as the master of up to five independent groups or as a slave unit for remote power control. The flash has a guide number of 160 (feet at ISO 100, 200mm zoom) and has a “compact and lightweight design.”

The flash head rotates 180 degrees in either direction and tilts over 90 degrees for easy bouncing capabilities. The head zooms automatically from 20-200mm and has a holder for gels. The flash includes an LCD display and can be updated via future firmware updates.

The two transceivers, the TR-611C TTL and TR-612N TTL both have a range of up to 980 feet (300 meters) for Canon and Nikon lighting systems respectively. By attaching the transceiver to your hot shoe, you can remotely adjust the power of the Rovelight RT610 TTL Monolight. The TR-611C also offers remote control over the Orlit RT600C Speedlite.

The Orlit line is available exclusively at Adorama and you can preorder them now with shipping expected to begin in February. The Orlit Rovelight RT 610 will retail for just under US$700. The RT-600C Speedlite for Canon costs around $170 and the two transceivers are each around $70.