For a two-time combat veteran, photography is an outlet and a way to give a face to PTSD 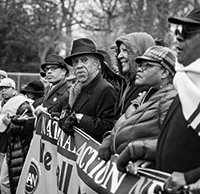 Michael McCoy served two tours in Iraq. He returned home with a photography hobby and post traumatic stress disorder (PTSD). “On my first trip to Iraq, I would take tons of pictures to keep up the morale and to send back to friends and family,” McCoy told TIME. All the photos he captured had been backed up to a hard drive and McCoy lost that hard drive, which proved devastating. “I had pictures of family members that are deceased. I realized the only thing I could do was document life in the present.”

A Baltimore native, McCoy witnessed the riots following the death of Freddie Gray. He documented the riots and hoped that “the pictures I take could reach a viewer to demand accountability from the people that they elected to office, and the people that are chosen to serve. And to see that all police officers, and all protesters, aren’t bad people.” Beyond serving the role of capturing the world around him, McCoy’s photography helps provide him an emotional outlet. Affected by PTSD, photography helps take “the edge off of past experiences” and “trauma from Iraq” for McCoy.

He hopes that his photography and personal story will help put a face on PTSD, which he notes is still not treated appropriately by society and that many people don’t give mental illness the validity it deserves.