Previous Story How it’s made: Behind the scenes at Leica’s German factory
Next Story Creating photos out of thin air: Team of researchers develop AI capable of translating paintings to photos 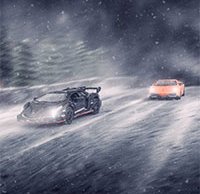 Cameras have the ability to capture scenes exactly as they are, but they are also powerful tools in the hands of creative individuals, allowing viewers to be transported into new worlds. Photographers Vatsal Kataria and Mitchel Wu both use small toys and props and clever angles to bring miniature worlds to life in vivid detail.

Kataria is a commercial photographer in India and he specializes in taking photos of model cars and motorcycles. Rather than drive expensive exotic automobiles, he builds elaborate sets and creates special effects for his model cars, making them look like they’re part of big natural scenes.

Kataria doesn’t always buy his models and props, he prefers to build them. He told PetaPixel “I make most of the props and models. I can buy models but I prefer making them in the cheapest way possible. It improves my skills.” Some projects can be done in a day, others take up to a week. When looking at the images below, you can see why some of them take much longer. You can view more of Vatsal Kataria’s work at his website and on Instagram.

Another photographer who captures excellent images of toys is former wedding photographer Mitchel Wu. Wu posted in an SLR Lounge community, “I love telling stories, and I think most people would agree that photography, like most art forms, is first and foremost about telling stories. I immediately saw the potential to tell these fun, amazing stories through toy photography and never looked back. Every single one of us played with toys when we were kids. As most of us grow up we stop playing with toys, and move on to other interests. Toy photography became a way for me to rekindle that love I used to have with toys – it’s so much fun!”

A post shared by Mitchel Wu Photography (@mitchelwuphotography) on

A post shared by Mitchel Wu Photography (@mitchelwuphotography) on

Wu always uses practical effects in his photography, you see what was really there at the time of capture, including liquids, fire, smoke and more. To learn more about Wu’s photography, see here and here. You can see his work by following him on Instagram.

Tweet
Comment
Previous Story How it’s made: Behind the scenes at Leica’s German factory
Next Story Creating photos out of thin air: Team of researchers develop AI capable of translating paintings to photos