Pulitzer Prize-winning photographers announced: Photojournalists give a voice to the victims of violence 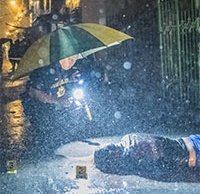 The 2017 Pulitzer Prizes have been awarded and the winning photographers this year are a pair of photographers who turned their lenses on violence across the world.

In the Breaking News Photography Award, Daniel Berehulak won for his coverage of the government crackdown, assault and violence on drug dealers and users in the Philippines that resulted from President Rodrigo Duterte’s aggressive antidrug campaign. Berehulak is an accomplished photojournalist from Australia who is currently based in Mexico City. His career has taken him to over 60 countries and he has previously received a Pulitzer Prize in 2015 for his coverage of the Ebola epidemic in West Africa and was a finalist in 2011 for his 2010 coverage of flooding in Pakistan.

Berehulak’s 2017 prize-winning work was captured over a span of 35 days and includes photographs of 57 homicides at 41 separate crime scenes perpetrated by vigilantes inspired by Duterte’s “kill them all” mandate. Berehulak worked with Rica Concepcion, a verteran Filipino journalist and local fixer. The interactive article and images that Berehulak created for the New York Times is insightful, informative and graphic. The images are visually powerful and emotionally disturbing.

Of his work, Berehulak says, “This is a story that isn’t going away. So it’s important that the story is recognized and attention is paid to what is happening right now in the Philippines.” He continued, “Every single night I came across people killed at the hands of the police, at the hands of vigilantes, in ruthless state-sanctioned killings. Day in and day out you have to do the story justice. You have to follow the trail, and the trail unfortunately started with the deaths.”

The New York Times’s International Photo Editor, David Furst, said this of Berehulak and his prize-winning work, “Daniel has this remarkable ability to fuse this strong, forceful, in-your-face, on-the-ground photojournalism with an empathy for his subjects that is second to none. This piece has that kind of depth because Daniel has that kind of depth that he brings to his photography. He stayed behind when other photographers would come, snap and run. He went to the bottom of the story…At the heart of our best work is brilliant journalism. As we struggle to define this new era of storytelling, we need to remember that guys like Daniel are not only on the front lines of the story but of storytelling itself.”

The 2017 Pulitzer Prize for feature photography was awarded to E. Jason Wambsgans
for his coverage of violence much closer to home. Wambsgans photographed a 10-year-old Chicago boy, Tavon Tanner, during the aftermath of a gunshot wound he suffered while sitting on his front porch.

The story chronicled Tanner’s physical and emotional recovery in the wake of being shot. Of Tanner, the photographer said, “It was a gift from him. He’s a brave, extraordinary little boy,” He wanted his story to be told.” Wambsgans has been a staff photographer for the Chicago Tribune since 2002 and he has been photographing the results of the city’s infamous gun violence over the last four years. He’s utilized a variety of photographic approaches during his tenure, including subtle versus more graphic visuals.

He has met with numerous children who have been victims of gun violence over the years, but Tavon was the first who he felt he really connected to. “In late summer I met Tavon and his mother, Melanie. Immediately I had a connection with him. He a beaut, expressive kid who was one of the rare photo subjects, he is so expressive, it’s kind of overwhelming as a photographer.”

For much more information on Tavon Tanner and to see more of Wambsgans’s work, see the Tribune article here.

The two Pulitzer Prize-winning photographers for 2017 showcase the importance of documenting violence around the world and telling the stories of those who are either no longer able to tell it themselves or who are simply too young. Photographers and other journalists continue to give voices to the voiceless and it’s critical to recognize their contributions. To see the rest of the journalists who won Pulitzer Prizes this year, see the list of winners.