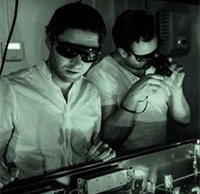 Who doesn’t love slow motion? There’s something very impressive about high-tech slow-motion cameras. Perhaps none are more impressive than the device a team has built at Lund University in Sweden. Their new fast camera can record five trillion - yes, that’s 5,000,000,000,000! – frames per second.

At these insane speeds, you can record light as it travels, as can be seen in the video below – which has been slowed down by a factor of one trillion. The team captured a pulse of light traveling a distance equivalent to roughly a sheet of paper. Unlike traditional cameras, which capture images sequentially, one at a time, the team at Lund leverages algorithms to capture multiple images at once, which are then sorted into a sequence later.

The technology used in the new camera has been dubbed Frequency Recognition Algorithm for Multiple Exposures (FRAME) and it works by using coded light flashes to be sort out where each light pulse arriving at the sensor came from. The camera emits different “codes” with varying light flashes all at once, which are bouncing off objects and being returned with their unique codes, allowing the camera later to properly assemble a sequence from a single frame.

The camera has been created to capture events when studying chemistry and physics. For those keeping score at home, the camera can record events as short as 0.2 trillionths of a second, making it the fastest camera in the world, per Lund University.

While there are many possible uses for the technology, researchers at Lund are currently focusing their efforts on combustion, a complicated area of science. Ideally, with a more informed understanding of combustive processes, perhaps engines could be made more efficient.