Previous Story 7.5mm f/2 MFT lens: Venus Optics announces the world’s widest f/2 lens for Micro Four Thirds cameras
Next Story Do-it-yourself optics: Why buy a lens when you can build your own? 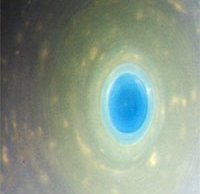 NASA’s Cassini spacecraft launched in 1997 and has been orbiting Saturn since 2004. It is currently in the “Grand Finale” stage of its mission, which entails the spacecraft flying over Saturn’s poles. As is regularly the case, the images from NASA’s Cassini mission and the Grand Finale are available online.

Sophia Nasr, an astroparticle physicist, has processed images from NASA to create the first true color image of Saturn’s north pole. Nasr used three photographs and combined them using red, green and blue filters in Photoshop plus other edits to create an image of what the scene below would look like to the human eye. That is, if we were able to ride along with Cassini at 77,000 miles per hour.

The blue feature you can see below is a persistent hurricane on Saturn’s north pole. The hurricane is 1,200 miles across. Per NASA, the hurricane has been raging on the north pole of Saturn for at least decades, perhaps even centuries. Beautiful images like this will continue to be captured by Cassini until September 15, 2017, at which point the spacecraft will dive into Saturn’s atmosphere, resulting in its destruction. The decision to have Cassini destroyed is to prevent the spacecraft from potentially crashing into one of Saturn’s moons, which could lead to biological contamination.

(Via PetaPixel and DIY Photography)