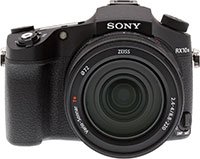 Sony has a long history of working with conservation groups, including providing imaging technology to Conservation International since 1995 and helping to protect a heritage forest in Sumatra. One of their recent endeavors was to outfit wildlife photographers across Europe with the Sony RX10 III to capture images of rare and endangered species for a photography series highlighting the rare animals and raising funds to help protect them. For the work, Sony partnered with the European Outdoor Conservation Association.

The Sony RX10 III is well-suited for the task due to its super-telephoto zoom capabilities (it has a built-in 24-600mm equivalent zoom lens) and 20-megapixel sensor. The RX10 III also has a silent electronic shutter, ensuring that you can shoot photos without spooking your subject. One of the photographers Sony equipped with the RX10 III is a two-time finalist for Wildlife Photographer of the Year, Sam Hobson. Other talented wildlife photographers who took part in the project include Lassi Rautiainen, Javier Alonso Huerta, Markus P. Stähli and Gustav Kiburg.

Of the photography series, Yann Salmon Legagneur, Head of Product Marketing for Digital Imaging for Sony Europe said, “We are delighted to showcase this collection of beautiful rare animals’ pictures, creatures that can be found right on our European doorstep. The Sony RX10 III, with its extended 600mm super-telephoto zoom lens and silent shutter capability ensures that these incredible animals are not disturbed whilst photos are taken.”

The General Manager of the European Outdoor Conservation Association, Catherine Savidge, “By capturing these images, we are able to share photography of these wondrous animals in their natural habitat with those who might never see them. In ten years, EOCA has raised over €2 million from the outdoor industry and spent 100% of it on projects conserving threatened species and habits in 41 different countries. Working with Sony enables us to highlight this vital conservation work to the public.”

Anytime a company can help raise awareness of fund a conservation effort, it’s a great thing. When photography can play a role? It’s even better. Kudos to Sony, the European Outdoor Conservation Association and to the participating photographers.