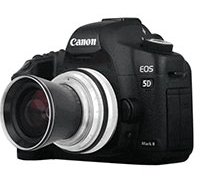 After six successful Kickstarter campaigns, Lomography has created a seventh – which has already been wildly successful – to bring the Neptune Convertible Art Lens system to photographers using Canon EF, Nikon F and Pentax K mount cameras. Keep in mind that since these lenses are manual, functionality should be essentially the same when using the lenses on other systems with adapters.

What makes these lenses convertible? There is a lens base which is mounted to your camera and then three separate lenses which can be attached to the base. The three lenses are 35mm f/3.2, 50mm f/2.8 and 80mm f/4 optics. The lenses also include swappable dual aperture systems, one a traditional iris diaphragm aperture mechanism and the other allows for special drop-in aperture plates to create distinct bokeh.

What will all this cost? You can get a Super Early Bird package including a lens base, the three front lenses and six special aperture plates for around US$600, a discount of 40 percent over the eventual final price. The special aperture plates included are: patterned circle, five-pointed star, diamond, cross, teardrop and sun.

Some technical specifications for the new lenses include close focus distances of 9.8 inches (0.25 meters), 15.7 inches (0.4 meters) and 31.5 inches (0.8 meters) for the 35mm, 50mm and 80mm lenses respectively. Each lens utilizes multi-coated glass and includes four elements in four groups. The lens base itself includes three elements in three groups. The manual focus lenses rely on a helicoid focusing mechanism. You can see lens diagrams and MTF charts here.

For much information on the Neptune Convertible Lens system and to back the project, see here. It is worth considering that the nature of the system means that Lomography could – and intends to – continue expanding the system such that photographers could attach different focal lengths to the lens base or use additional special aperture plates. It will be interesting to see how the lenses perform when users get their hands on them later this year and where the system goes from here.