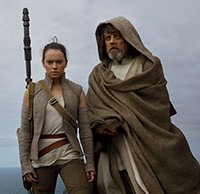 Leica cameras and lenses are traditionally expensive, yes, but the new Prototype B version of the Noctilux 0.95 Edition takes luxury to the next level. One of the special lenses is available now for $25,000 through Leica Store San Francisco. The special edition lens reads “prototype B” on the back side of the barrel and has a matte black cap, unlike the glossy lens cap that comes with other 0.95 Edition lenses. Annie Leibovitz captured exclusive portraits for Vanity Fair’s latest cover story - written by David Kamp - about the upcoming film, "Star Wars: The Last Jedi." In the extensive preview for the film, there are many portraits of the various characters, including Mark Hamill’s legendary Luke Skywalker the late Carrie Fisher, who was well-known for her role of Princess Leia in the Star Wars saga. There are many behind-the-scenes shots too, which are sure to interest Star Wars fans. Click here to read the article and see Leibovitz's photographs.

Yesterday, Ricoh quietly announced the new WG-50 camera. This camera is a successor to the WG-30 and it is a modest upgrade. If you have been looking at purchasing a WG-30, you should start looking at the WG-50 instead.

Direct your models rather than pose them – ISO 1200

Photographer Derek Heisler recommends that you direct your portrait subjects rather than pose them. The difference is not always obvious, but directing is an important skill to have.

If you’re not familiar with Eric Kim’s blog, he regularly posts a wide range of awesome content that is unlike anything else you’ll find on the web. While he does discuss gear, his topics more often include philosophical discussions on happiness, the meaning of photography and more. As a successful professional photographer, Kim also often covers business topics, such as in his latest blog post on marketing. Eric has a very honest and unfiltered approach and his language shows that, so if you’re easily offended, tread carefully.

Kodak has launched a GSM version of their Ektra phone in the US. The “camera-first smartphone” includes a rear 21-megapixel sensor and f/2.0 lens. The front camera is 13 megapixels and the camera includes phase-detect autofocus and HDR functionality. The 4K-equipped smartphone has 32GB storage, 3GB of RAM and a 5-inch IPS LCD touchscreen display. The unlocked phone is available for preorder now and is GSM/4G LTE compatible. Photographer Jay P. Morgan of The Slanted Lens has a new video all about aperture and lens flare. It’s not uncommon to add lens flare in Photoshop, but how can you create lens flare in the camera? First step is to lose your lens hood, which is designed to eliminate lens flare. You don’t need the sun for lens flare, try pointing a flashlight at your lens. You can position your subject in specific ways to influence the kind of lens flare you get. The video below also looks at how your aperture value affects the size and shape of lens flare.