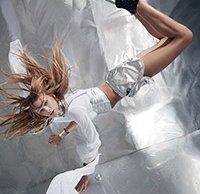 In today's edition of Shutter Release, we will look at four videos which cover a wide range of topics. We will open with a video from photographer Serge Ramelli that is all about getting your photography business up and running. Next up is a neat behind the scenes look at a zero gravity photoshoot followed by a video about diffusion and how to use soft light for video recording. Finally, we wrap up with a video about why you should be shooting 4K video if you have a camera capable of it, even if you want Full HD video.

Photographer Serge Ramelli is an established professional photographer so he is very qualified to offer advice on becoming published. In the nearly 16-minute video below, Ramelli discusses different tactics you can use to make a name for yourself. If you want to have your work published, it's well worth watching.

Behind the scenes of a zero gravity photoshoot - Fstoppers

Earlier this year, Wix hosted a photography concept contest. The idea Wix determined to be the best would be fully funded and brought to life. A zero gravity concept by Japanese photographer Reiko Wakai was the winner. Fstoppers was invited to go to the shoot and they filmed a pair of behind the scenes videos, the second of which is a 360-degree video.

Diffusion in video, how and why you should be using soft light - ISO 1200

Caleb Pike of DSLR Video Shooter has made a new video about diffusion and soft light.

With more and more cameras being capable of recording 4K video, Peter McKinnon has a new video telling you why it's worth using that 4K capability, even if you ultimately want to use 1080p video. He raises many interesting points.