Previous Story Nikon D850 Review - First shots from the lab!
Next Story Firmware Friday: Fuji to upgrade the GFX 50S and X-series cams; Canon, Nikon and Sigma get updates too 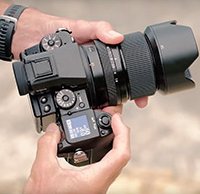 As we head into the weekend, let's take a look at a variety of photo-related content from around the web. Shutter Release is our ongoing regular feature here at Imaging Resource in which we share and summarize interesting content we come across. It could be announcements for new gear, opinion pieces or tutorials. Of course, it could be something else entirely different too.

In the case of today's Shutter Release roundup, we will look at a video GFX story from Fujifilm about their new GF 45mm f/2.8 lens, first images of prototype Fujifilm lenses, an article about the "three elements of every photograph," news about Canon's production in Japan and finish with an article about hard drive failure rates. Get that shutter finger ready and let's get shooting!

Fujifilm X Photographer Éric Bouvet tried out the new GF 45mm f/2.8 lens, which is scheduled to ship in November. The video below is a neat look at a professional working with the GFX and new GF lens. For the curious viewer, the video was shot on a Fujifilm X-T2.

While the lenses are mockups and may not be exactly the same as the production lenses which come out down the line, you can check out what the new Fujinon XF 8-16mm f/2.8, XF 200mm f/2 and GF 250mm f/4 currently look like over at Fuji Rumors. The new 200mm f/2 is unsurprisingly a very large optic, so go take a look.

The three elements of every photograph - Fstoppers

Photographer and Fstoppers writer Dylan Goldby has written an article about the three elements that make up every photograph. I don't want to spoil his article, but one of the big three is composition. He offers an interesting take on what comprises composition, including how to use your lens to create different compositions.

Nikkei is reporting that Canon plans to have a new camera plant operational by 2019 as it brings more of its camera production back to the homeland. To help keep costs low, Canon will be heavily employing factory automation. It will be Canon's first new plant in Japan since 2010. For more information, click here.

Photographers need a lot of storage. And as cameras get higher megapixel sensors, the storage needs will only increase. There are many hard drives out there and it's hard to know which ones are good or bad until they start failing. Backblaze is a major player in the storage industry so they have access to a massive sample size of hard drives, offering them the unique opportunity to know which hard drives are more or less reliable. Check out the latest data here.